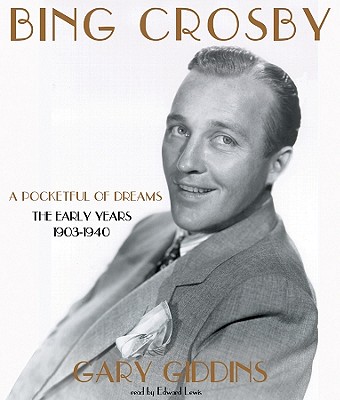 By Gary Giddins, Edward Lewis (Read by)
Email or call for price
Subject to Availabilty

From 1934 to 1954, Bing Crosby utterly dominated American entertainment. The number one movie star for five years in a row, he had more hit records than anyone in history. The rise of Bing Crosby was the rise of the American popular culture itself. In this commanding biography, eminent cultural critic Gary Giddins takes us on the remarkable journey that brought a provincial young law student from Spokane to the pinnacle of the entertainment world. Giddins chronicles Crosby's rise from vaudeville to Paul Whiteman's orchestra on to vast success in Hollywood, from his courtship of the beautiful and tragic Dixie Lee to his triumph as the sportsman who created the first celebrity pro-am golf tournament and helped build the Del Mar racetrack. Giddins reclaims Crosby's central role in American cultural history.