The Hunt for Zero Point: Inside the Classified World of Antigravity Technology (Paperback) 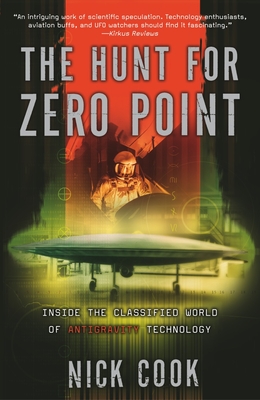 This riveting work of investigative reporting and history exposes classified government projects to build gravity-defying aircraft--which have an uncanny resemblance to flying saucers.

The atomic bomb was not the only project to occupy government scientists in the 1940s. Antigravity technology, originally spearheaded by scientists in Nazi Germany, was another high priority, one that still may be in effect today. Now for the first time, a reporter with an unprecedented access to key sources in the intelligence and military communities reveals suppressed evidence that tells the story of a quest for a discovery that could prove as powerful as the A-bomb.

The Hunt for Zero Point explores the scientific speculation that a "zero point" of gravity exists in the universe and can be replicated here on Earth. The pressure to be the first nation to harness gravity is immense, as it means having the ability to build military planes of unlimited speed and range, along with the most deadly weaponry the world has ever seen. The ideal shape for a gravity-defying vehicle happens to be a perfect disk, making antigravity tests a possible explanation for the numerous UFO sightings of the past 50 years.

Chronicling the origins of antigravity research in the world's most advanced research facility, which was operated by the Third Reich during World War II, The Hunt for Zero Point traces U.S. involvement in the project, beginning with the recruitment of former Nazi scientists after the war. Drawn from interviews with those involved with the research and who visited labs in Europe and the United States, The Hunt for Zero Point journeys to the heart of the twentieth century's most puzzling unexplained phenomena.

For more than a decade, NICK COOK has served as aviation editor of Jane's Defense Weekly, the world's leading military-affairs journal. His articles have also appeared in newspapers worldwide. He lives in London.

“An extraordinary investigation into aviation’s greatest mystery.” —Mail on Sunday