Two to the Fifth: An Adventure in the Land of Xanth (Paperback) 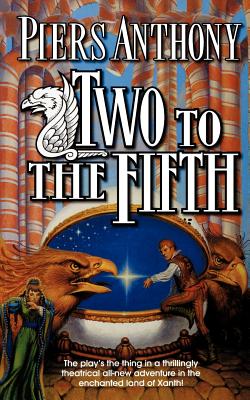 This is book number 32 in the Xanth series.

The future of Xanth is in frightful peril. A powerful magical bird named Ragna Roc has embarked on a campaign to become absolute ruler of that mystical realm. Those who swear loyalty to him are spared. The rest are simply disappeared.

So powerful are Ragna's sorceries that even the Good Magician Humfrey dares not confront him directly. Instead he enlists Cyrus the Cyborg, a handsome half-human playwright with little knowledge of the world, in a stealthy subterfuge. Cyrus must assemble a troupe of traveling players to attract Ragna's interest. And hidden in disguise among the bevy of beautiful young actresses are the young princesses, Melody, Harmony, and Rhythm, whose magics might just be a match for the evil bird.

But Ragna has planted a spy in the midst of the troupe, one who knows their deepest secrets, including the true nature of Cyrus's forbidden love for one of the young princesses. Only a mysterious child called Kadence, and a cryptic clue - "Two to the Fifth" - may give the companions the edge they need to defeat Ragna's dictatorial dreams.

Brimming with passion and merriment, drama and deception, Piers Anthony's thirty-second Xanth fantasy, Two to the Fifth, is a pun-packed performance sure to provoke applause and ovations from the series' myriad fans.

Piers Anthony is one of the world's most prolific and popular fantasy authors and a New York Times bestseller twenty-one times over. His Xanth novels, including Esrever Doom, Luck of the Draw, and Well-Tempered Clavicle, have been read and loved by millions of readers around the world. While he is best known for his science fiction and fantasy, Anthony incredibly versatile, having also written several novels in other genres, including historical fiction and horror. He lives in Central Florida.

“This being Xanth, the adventurers find absurdities, danger, and romance but also find themselves unwittingly involved in extremely complex intrigue. Classic Xanthromancy.” —Booklist on Air Apparent