The Soul of a New Cuisine: A Discovery of the Foods and Flavors of Africa (Hardcover) 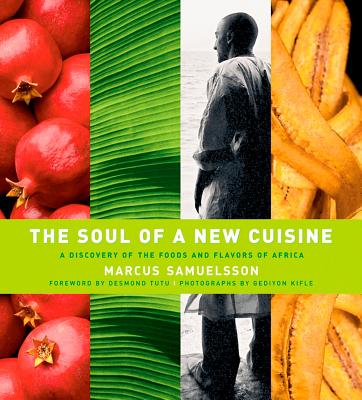 By Marcus Samuelsson
$40.00
On Our Shelves Now

"For as long as I can remember, I've had Africa on my mind." Award-winning chef Marcus Samuelsson may be best known for his innovative take on Scandinavian cuisine at New York's Restaurant Aquavit, but his story begins thousands of miles away, in Africa. Born in Ethiopia and raised in Sweden by adoptive parents, his life transcends national boundaries, and his individual approach to cuisine is a global yet personal one that draws freely from many ethnic and cultural influences.

In The Soul of a New Cuisine, Marcus returns to the land of his birth to explore the continent's rich diversity of cultures and cuisines through recipes and stories from his travels in Africa. Stunning color images by award-winning photographer Gediyon Kifle bring the breadth of the African experience to life, from fishermen at sunset off the coast of Zanzibar to French baguettes loaded onto a bicycle in Senegal.

Marcus shares more than 200 enticing recipes, including his own African-inspired creations and traditional dishes from all parts of Africa. You can delight in spicy stews and Barbequed Snapper from West Africa and the familiar Mediterranean flavors of dishes like Moroccan Lemon-Olive Chicken, or make your way east and south for the irresistible taste combinations of dishes such as Curried Trout with Coconut-Chili Sauce from Kenya and Apple-Squash Fritters from South Africa's Cape Malay. Using ingredients that are readily available in American markets, the recipes are doable as well as delicious.

Of course, one of the keys to authentic African cooking is the use of spice blends and rubs, which elevate simple cooking techniques to an excitingly varied and intense level. Marcus includes his favorites here, with blends that go from sweet to spicy and feature everything from hot chili peppers and peppermint leaves to sesame seeds and ginger.

As he says, Africa is "a state of mind that I hope this book will help you tap into wherever you are." By cooking with a handful of this and a pinch of that, trying new foods and enjoying old ones in a new way, and lingering over meals with family and friends, you will bring the free, relaxed spirit of African cooking to your table and discover for yourself the soul of a "new" cuisine.

MARCUS SAMUELSSON owns Red Rooster Harlem, Ginny's Supper Club, and Street Bird. He is the author of Marcus Off Duty; the New York Times bestseller Yes, Chef; the James Beard Award-winning Soul of a New Cuisine; and Aquavit. He frequently appears as a judge on Chopped and lives with his wife in Harlem.

"His remarkable history gives life to the more than 200 mouth-watering recipes that make this book as much about culture as cuisine. It's a page-turner for curious cooks." (Traditional Home Magazine, April 2007)

"...with sumptuous photographs by Gediyon Kefle that will inspire you to follow Samuelsson on his travels... his recipes are seductive amalgams, designed to lure American cooks into adding less-familiar African flavors—like those found in mango couscous, spiced with jalapeno—to their culinary vocabularies." (New York Times Book Review, December 3, 2006)

"deeply personal mix of recipes and culture from chef/restaurant owner and native African whom Gourmet named 'one of the most innovative chefs in the world.'" (USA Today, November 29, 2006)

"American cooks have explored many parts of the world in their kitches, but one continent is almost entirely missing from our repertoires—Africa (except for its Mediterranean outposts). Marcus Samuelsson may change that single-handely." (San Francisco Chronicle, November 2006)

"Original, intelligent and well-executed. [Samuelsson's] The Soul of a New Cuisine: A Discovery of the Foods and Flavors of Africa represents a personal culinary odyssey...sweeping photographs of Africa's food, landscape and peoples...the result is a compelling blend of traditional recipes and a kind of personal fusion food." (Los Angeles Times, November 8, 2006)

Born Ethiopian, raised Swedish, and now one of New York City's top chefs, Samuelsson (Aquavit: And the New Scandinavian Cuisine) has written an exotic yet accessible book that will hasten the coming of the African fusion cookery he envisions. His 204 recipes and 258 color photos are enriched with personal and political history; as in his many condiments and sauces, the balance is right. While he stresses the diversity and bounty of the second-largest continent, he repeatedly describes African cuisine as poor people's cooking, crafted with simple tools and necessarily emphasizing starches, vegetables and big flavors. Whether it's rosemary for Honey Bread or turmeric, ginger and cinnamon in his Vegetable Samosas, herbs and spices are always sauteed in oil or tossed in a hot dry pan, to intensify and mellow. He even proposes toasting the cinnamon for the whipped cream accompanying his Ethiopian Chocolate Rum Cake. The recipe for the cake is typical: the batter is prepared in a single bowl, mixed with a spoon, and bakes up moist and gingerbread-like, with great keeping properties. Toasting the cinnamon takes seconds and is impressive in the complexity it delivers. (Oct.) (Publishers Weekly, June 19, 2006)