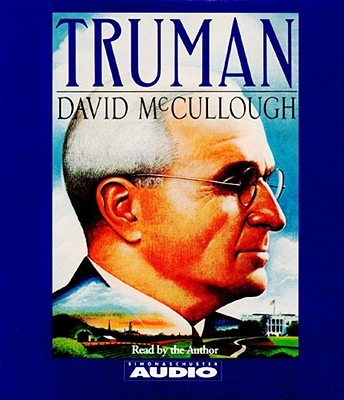 The Pulitzer Prize–winning biography of Harry S. Truman, whose presidency included momentous events from the atomic bombing of Japan to the outbreak of the Cold War and the Korean War, told by America’s beloved and distinguished historian.

The life of Harry S. Truman is one of the greatest of American stories, filled with vivid characters—Roosevelt, Churchill, Stalin, Eleanor Roosevelt, Bess Wallace Truman, George Marshall, Joe McCarthy, and Dean Acheson—and dramatic events. In this riveting biography, acclaimed historian David McCullough not only captures the man—a more complex, informed, and determined man than ever before imagined—but also the turbulent times in which he rose, boldly, to meet unprecedented challenges. The last president to serve as a living link between the nineteenth and the twentieth centuries, Truman’s story spans the raw world of the Missouri frontier, World War I, the powerful Pendergast machine of Kansas City, the legendary Whistle-Stop Campaign of 1948, and the decisions to drop the atomic bomb, confront Stalin at Potsdam, send troops to Korea, and fire General MacArthur. Drawing on newly discovered archival material and extensive interviews with Truman’s own family, friends, and Washington colleagues, McCullough tells the deeply moving story of the seemingly ordinary “man from Missouri” who was perhaps the most courageous president in our history.

David McCullough has twice received the Pulitzer Prize, for Truman and John Adams, and twice received the National Book Award, for The Path Between the Seas and Mornings on Horseback. His other acclaimed books include The Johnstown Flood, The Great Bridge, Brave Companions, 1776, The Greater Journey, and The Wright Brothers. He is the recipient of numerous honors and awards, including the Presidential Medal of Freedom, the nation’s highest civilian award. Visit DavidMcCullough.com.

David McCullough has twice received the Pulitzer Prize, for Truman and John Adams, and twice received the National Book Award, for The Path Between the Seas and Mornings on Horseback. His other acclaimed books include The Johnstown Flood, The Great Bridge, Brave Companions, 1776, The Greater Journey, and The Wright Brothers. He is the recipient of numerous honors and awards, including the Presidential Medal of Freedom, the nation’s highest civilian award. Visit DavidMcCullough.com.

personalities. In this compelling saga of America’s greatest common-man president, McCullough adds luster to an old-fashioned historical approach . . . the sweeping narrative, filled with telling details and an appreciation of the role individuals play in shaping the world.”

“McCullough is a master storyteller whose considerable narrative skills have been put to exquisite use in re-creating the life and times of America’s 33rd president.”

“Perhaps the highest tribute one can pay a biographer is to say that through him one comes to know his subject almost as though in person. In fostering the reader’s acquaintance with Harry Truman, not once does McCullough get in the way. This is in every respect a splendid work.”

“Since I’ve been in national politics, whenever I’ve been asked who my favorite political leader of the century is, I have always said Harry Truman…. David McCullough has always been a favorite of mine. The Truman biography is outstanding.”

“Exemplary and riveting…. The book is like a comfortable Victorian three-decker novel. There are two plots, a hero and heroine, and a glittering cast of characters ranging from Dean Acheson, Churchill and General Marshall to the Pendergasts and General MacArthur, as well as a splendid collection of Shakespearean clowns…. McCullough’s book will stand for a long time as the outstanding analysis of an extremely important subject: the greatness of Truman, and its role as an exogenous ‘cause’ in the history of his time.”

“An impressive and valuable study of Truman, worthy of its subject.”

“Truman is biography as good as it gets, as absorbing and readable as it is voluminous. McCullough writes like a novelist, digs like a zealous reporter and puts things in perspective like the superb historian he is.”

“This is the biography of President Harry S. Truman against which not only all other Truman biographies but probably all other presidential biographies will be measured. It is comprehensive, well reasoned, insightful and yet elegantly simple. It is written with a love for the subject that is contagious.”

“McCullough takes us on a beautifully guided tour of recent history—a journey that is as much a celebration of American experience as it is a captivating portrait of the ordinary ‘man from Missouri’ who became an extraordinary figure in the Cold War world. Keeping Truman himself always vividly in the foreground, Mr. McCullough has written a stirring, masterly, thoroughly absorbing book.”

“Superbly researched and carried forward by McCullough’s narrative drive, Truman is endlessly readable. The Harry we were all wild about is re-created exactly as Harry was—feisty, preposterous, decisive, tireless, outrageous, but always honorable, always courageous, always guided by his inner gyroscope of conscience and character.”