The End of History and the Last Man (Paperback) 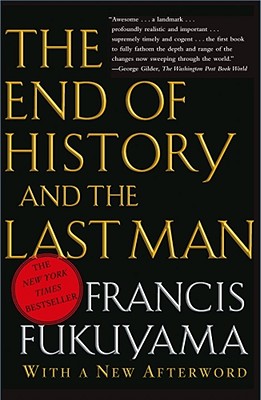 Ever since its first publication in 1992, the New York Times bestselling The End of History and the Last Man has provoked controversy and debate. "Profoundly realistic and important...supremely timely and cogent...the first book to fully fathom the depth and range of the changes now sweeping through the world." —The Washington Post Book World

Francis Fukuyama's prescient analysis of religious fundamentalism, politics, scientific progress, ethical codes, and war is as essential for a world fighting fundamentalist terrorists as it was for the end of the Cold War. Now updated with a new afterword, The End of History and the Last Man is a modern classic.

Francis Fukuyama is a Senior Fellow at the Freeman Spogli Institute for International Studies (FSI) at Stanford University, and Mosbacher DIrector of FSI's Center on Democracy, Development, and the Rule of Law. Dr. Fukuyama has written about questions concerning governance, democratization, and international political economy. His book The End of History and the Last Man has appeared in over twenty foreign editions. His most recent books are The Origins of Political Order: From Prehuman Times to the French Revolution, and Political Order and Political Decay: From the Industrial Revolution to the Globalization of Democracy.

"Awesome...a landmark...profoundly realistic and important...supremely timely and cogent...the first book to fully fathom the depth and range of the changes now sweeping through the world."

"Bold, lucid, scandalously brilliant. Until now, the triumph of the West was merely a fact. Fukuyama has given it a deep and highly original meaning."

"Provocative and elegant...Complex and interesting...Fukuyama is to be applauded for posing important questions in serious and stimulating ways."

"Extraordinary...Controversial...A superb book. Whether or not one accepts his thesis, he has injected serious political philosophy into the discussion of political affairs and thereby significantly enriched it."