The Dead and the Gone 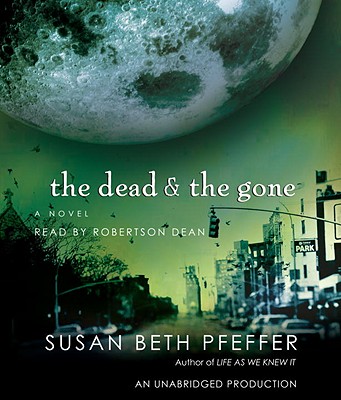 By Susan Beth Pfeffer, Robertson Dean (Read by)
$45.00
Email or call for price.

When life as Alex Morales had known it changed forever, he was working behind the counter at Joey’s Pizza. He was worried about getting elected as senior class president and making the grades to land him in a good college.  He never expected that an asteroid would hit the moon, knocking it closer in orbit to the earth and catastrophically altering the earth’s climate. He never expected to be fighting just to stay alive.

Susan Beth Pfeffer’s Life As We Knew It enthralled and devastated readers with its look at an apocalyptic event from a small-town perspective. Now this harrowing companion audiobook examines the same events as they unfold in New York City, revealed through the eyes of a seventeen-year-old Puerto Rican New Yorker.

When Alex’s parents disappear in the aftermath of tidal waves, he must care for his two younger sisters, even as Manhattan becomes a deadly wasteland. With haunting themes of family, faith, personal change, and courage, this powerful novel explores how a young man takes on unimaginable responsibilities.

Susan Beth Pfeffer is the author of many books for teens, including "Life As We Knew It, " which was nominated for fifteen state awards, and the bestselling novel "The Year Without Michael," which received numerous honors, including the South Carolina Young Adult Book Award. Pfeffer's other books include the popular "Portraits of Little Women" series and "Kid Power," which won the Dorothy Canfield Fisher Award and the Sequoyah Book Award. Look for "Life As We Knew It "on audio from Listening Library.