Gone 'Til November: A Journal of Rikers Island (Hardcover) 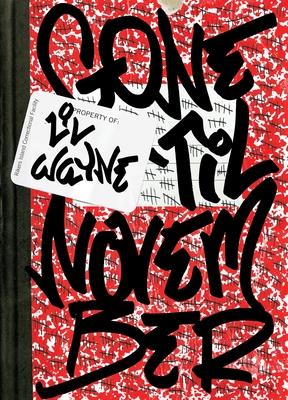 “Transfixing…[Wayne’s] prison diary is, above all, a testament to the irrepressibility of his charisma—his is a force that can never go dormant, even when it’s not plainly on display.” –The New Yorker

From rap superstar Lil Wayne comes Gone ’Til November, a deeply personal and revealing account of his time spent incarcerated on Rikers Island for eight months in 2010.

In 2010, recording artist Lil Wayne was at the height of his career. A fixture in the rap game for more than a decade, Lil Wayne (aka Weezy) had established himself as both a prolific musician and a savvy businessman, smashing long-held industry records, winning multiple Grammy Awards, and signing up-and-coming talent like Drake and Nicki Minaj to his Young Money label. All of this momentum came to a halt when he was convicted of possession of a firearm and sentenced to a yearlong stay at Rikers Island. Suddenly, the artist at the top of his game was now an inmate at the mercy of the American penal system. At long last, Gone ’Til November reveals the true story of what really happened while Wayne was behind bars, exploring everything from his daily rituals to his interactions with other inmates to how he was able to keep himself motivated and grateful. Taken directly from Wayne’s own journal, this intimate, personal account of his incarceration is an utterly humane look at the man behind the artist.

Having sold millions of albums worldwide and garnered four Grammy Awards, Lil Wayne is one of the most successful and critically lauded artists in hip hop. He released his first project at the age of twelve and went on to release his first solo album in 1999 when he was just seventeen. He released his first installment of his legendary Tha Carter series in 2004 before releasing three others, including the landmark Tha Carter III in 2008. Lil Wayne also holds the record for the most entries on the Billboard Hot 100 chart by a male solo artist with 109 entries, having surpassed the record previously set by Elvis Presley. His most recent studio album, I Am Not A Human Being II, was released in 2013 and debuted at #2 on the Billboard 200 charts. In 2015, Wayne released FWA (Free Weezy Album) exclusively on Tidal, where it was streamed a staggering ten million times within the first seven days alone. Outside of his iconic music career, Lil Wayne is the CEO of his own Young Money Records, as well as the successful apparel brand Trukfit. He also recently launched his own app, Lil Wayne: Sqvad Up.

“Transfixing…[Wayne’s] prison diary is, above all, a testament to the irrepressibility of his charisma—his is a force that can never go dormant, even when it’s not plainly on display.”–The New Yorker

"Inspiring ... an intimate and personal look into the mind of Lil Wayne."–New York Journal of Books

"[Wayne’s] slangy, informal tone shines vibrantly throughout … as an account of daily life in prison and its discontents, and as an exhortation to avoid incarceration, Gone 'Til November offers a rare perspective."–Shelf Awareness