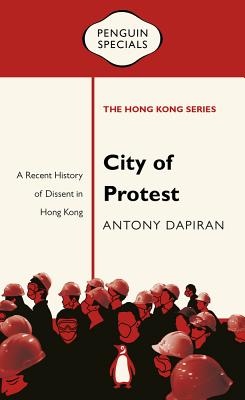 By Antony Dapiran
Email or call for price
Out of Print

Hong Kong is a city with a long history of civil disobedience. Antony Dapiran explores the historical and social stimuli and implications of public dissident movements from the turbulent 1960s until the most recent wave of protests, which became apparent in the 2014 Occupy Central movement. What emerges from these grassroots movements is a unique Hong Kong identity, one shaped neither by Britain nor China. City of Protest is a compelling look at the often-fraught relationship between politics and belonging, and a city’s struggle to assert itself.

Antony Dapiran is a Hong Kong-based finance lawyer, writer and photographer. He is a frequent commentator on Chinese business and legal matters, quoted by the Wall Street Journal, the South China Morning Post and more.

"Hong Kong is caught between China and an increasingly uncertain world. City of Protest is both an incisive analysis of the Umbrella Movement and an important record of Hong Kong's history of protest." —Ai Weiwei

"Required reading for those on both sides of the political spectrum . . . Dapiran achieves a clear-headedness lacking in much Hong Kong political debate." —South China Morning Post