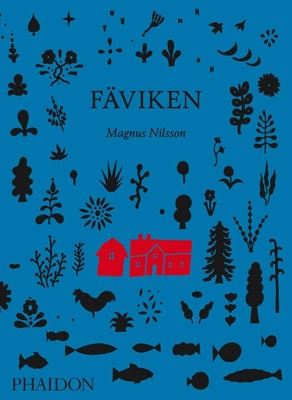 An exclusive insight into one of the world's most interesting restaurants, Fäviken Magasinet, and its remarkable head chef Magnus Nilsson featured in the Emmy-Award winning US PBS series The Mind of a Chef and the Netflix docuseries Chef's Table.

Fäviken is an exclusive insight into one of the world's most interesting restaurants: Fäviken Magasinet in Sweden. Narrative texts, photographs and recipes explain head chef Magnus Nilsson's remarkable approach to sourcing and cooking with ingredients that are farmed and hunted in the immediate vicinity of the restaurant, and how he creates a seasonal cycle of menus based on them. He runs the restaurant with the same ethos as the farm that the restaurant building once housed. The small team of chefs harvests and preserves all the food for the restaurant by hand using the most natural methods possible. They reject the popular contemporary cooking equipment such as low-temperature water baths and liquid nitrogen in favour of simple cooking methods of grilling and roasting over open coals, relying on the chefs' innate skills and knowledge of the product to get the perfect result. This approach results in the highly creative food they serve in the restaurant, the pure, intense flavours of which, far from seeming traditional, are remarkable.

The restaurant is near Järpen, 600km north of Stockholm, in a remote part of the country, an area popular with cross-country skiiers. The restaurant is in a traditional Swedish farm and caters for only 12 people each evening. The menu is the same for all the guests, and each dish is served to all the guests at the same time, introduced by Magnus himself. The dishes sometimes involve the use of traditional implements such as a nineteenth-century ice-cream churn or an old sourdough bread basket, which is still used for proving the dough.

Even though not everyone can visit Fäviken, Nilsson's approach to working with ingredients in the most natural, intuitive way possible, and making the most of each season, will inspire all cooks and food-lovers to think differently about the ingredients that are available to them. Many of the basic recipes for yoghurt, bread, porridge, vinegar, pickles and preserves are simple and straightforward enough for anyone to attempt at home, and the advice on natural preservation methods can be followed by anyone.

The texts will provide inspiration for chefs and food lovers all over the world and are fully accessible to the general reader.

Magnus Nilsson (b.1984) is the head chef of Fäviken Magasinet restaurant in Sweden. After training as a chef and sommelier in Sweden he worked with Pascal Barbot of L’Astrance in Paris before joining Fäviken as a sommelier. Within a year he had taken over the running of the restaurant. He is featured on the most recent season of "Mind of a Chef" on PBS, originally aired November 2014.

"Magnus is one of the brightest chefs that I have ever met – and this comes through so clearly when flicking through the pages of this book."—René Redzepi, NOMA

"...Extraordinary food... A book about an honest, and fundamentally Scandinavian, philosophy of food."—The Sunday Times

"A wonderful, fascinating book, richly designed and whose photos show both the actuality of everyday life at Faviken and its rare culinary minimalism."—The Daily Telegraph

"Master of even one dish would be worth the price tag."—Food & Travel

"This collection of recipes and stories from Nilsson's experimental, hyperlocal restaurant in west-central Sweden is a beautiful reminder of what 'farm-to-table' really means."—Bon Appetit

"Just as the best travel books describe an internal and external journey, Faviken tells the story of a chef discovering his cuisine in the woods of Sweden."—The Huffington Post

"Its heavy-stock pages open a door into one of the hottest restaurants in the world right now."—Time Out New York