How Not to Become a Spy: A memoir of love at the end of the Cold War (Paperback) 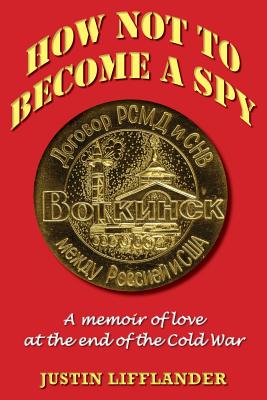 Justin Lifflander dreams of becoming an intelligence officer and joining the Cold War fight against the Russians. Following internships at the State Department and the FBI, he lands a job at the US Embassy in Moscow.

But Lifflander's story turns out to be less The Spy Who Loved Me and more Ferris Bueller's Day Off. He sets off for provincial Russia to live outside the gate of a nuclear missile factory and work as an inspector-janitor-chef on the US monitoring team. There he discovers Russians are just as friendly-and suspicious-as their American counterparts. What sinister significance could the Americans' pink lawn flamingos have? The local KGB wants to know.

The Americans are managed by young female "escorts" tasked by the KGB to watch for signs of espionage. They begin to manipulate Lifflander's favorite-a pretty girl named Sofia. Against the rules and reason, Justin and Sofia become emotionally involved.

Both a romantic comedy of errors and a narrative glimpse into the golden age of US-USSR relations during perestroika, Lifflander's memoir is revealed through deeply personal experience, humor, and heartache. It reminds us our enemies are never as unknowable as we think or as easy to fathom as we'd like.

"He cites the need to address the current "crisis of misunderstanding" between the United States and Russia, and urges us to challenge everything we think we know in that effort." - The Foreign Service Journal

"A memoir of a time and place which was rich in comedy and Justin had a keen eye. Anybody who knows Russia from that period will enjoy the ride down memory lane. For everybody else, a better understanding of Russia as it was being born will help make more sense of the country today ... perhaps an exaggeration, but a great read and a pleasant change from the plethora of academic works and the "Russia is evil" genre clogging airport book stands." - Chris Weafer, Macro Advisory

After majoring in Soviet Government at university, Justin Lifflander arrived in Russia in 1987 as a driver-mechanic for the US embassy in Moscow. A year later, he moved to Votkinsk in the foothills of the Ural Mountains, where he inspected missiles at a production plant as part of the INF nuclear disarmament treaty between the US and the USSR. There he met a young woman assigned to keep an eye on him for the local KGB. After his stint as a weapons inspector, Lifflander moved back to Moscow, got married, and worked as an executive for Hewlett-Packard Russia for twenty years. He then served as the business editor for the Moscow Times daily newspaper from 2010 to 2014 and authored several articles about Russian-American relations, the tragicomedy of life in Russia, and cigars. He now holds American and Russian citizenships and resides in Moscow with his wife, son, and mother-in-law.