Lectures on the Infrared Structure of Gravity and Gauge Theory (Paperback) 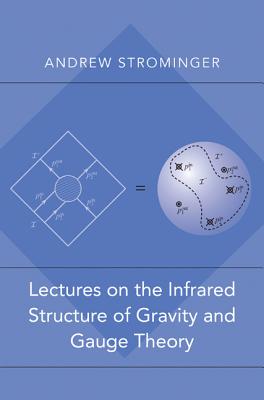 A short, graduate-level synthesis of recent developments in theoretical physics, from a pioneer in the field

Lectures on the Infrared Structure of Gravity and Gauge Theory presents an accessible, graduate-level synthesis of a frontier research area in theoretical physics. Based on a popular Harvard University course taught by the author, this book gives a concise introduction to recent discoveries concerning the structure of gravity and gauge theory at very long distances. These discoveries unite three disparate but well-developed subjects in physics. The first subject is the soft theorems, which were found by particle physicists in the 1950s to control the behavior of low-energy photons and are essential for all collider predictions. The second subject is asymptotic symmetries, found by general relativists in the 1960s to provide a surprising, infinite number of exact relations between distinct physical phenomena. The third subject is the memory effect, the measurement of which is sought in upcoming gravitational wave observations. An exploration of the physical and mathematical equivalence of these three subjects has provided a powerful new perspective on old results and led to a plethora of new results, involving symmetries of QED, gluon scattering amplitudes, flat-space holography in quantum gravity, black hole information, and beyond. Uniquely connective and cutting-edge, Lectures on the Infrared Structure of Gravity and Gauge Theory takes students and scholars to the forefront of new developments in the discipline.

Andrew Strominger is the Gwill E. York Professor of Physics at Harvard University.