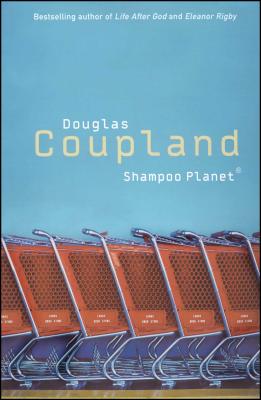 By Douglas Coupland
$17.00
On Our Shelves Now

Shampoo Planet is the rich and dazzling point where two worlds collide -- those of 1960s parents and their 1990s offspring, "Global Teens." Raised in a hippie commune, Tyler Johnson is an ambitious twenty-year-old Reagan youth, living in a decaying northwest city and aspiring to a career with the corporation whose offices his mother once firebombed.
This six-month chronicle of Tyler's life takes us to Paris and the ongoing party beside Jim Morrison's grave, to a wild island in British Columbia, the freak-filled redwood forests of northern California, a cheesy Hollywood, ultra-modern Seattle, and finally back home. On the way we meet a constellation of characters, among them: Jasmine, Tyler's Woodstock mom; Dan, his land-developer stepfather; "Princess Stephanie," Tyler's European summer fling; and Anna Louise, his post-feminist girlfriend with an eating disorder.
Tyler's dizzying journey into the contemporary psyche -- a voyage full of rock videos, toxic waste, french-fry computers, and clear-cut forests -- is a spellbinding signature novel for a generation coming of age as the millennium comes to a close.

Douglas Coupland is Canadian, born on a Canadian Air Force base near Baden-Baden, Germany, in 1961. In 1965 his family moved to Vancouver, Canada, where he continues to live and work. Coupland has studied art and design in Vancouver, Canada, Milan, Italy and Sapporo, Japan. His first novel, Generation X, was published in March of 1991. Since then he has published eleven novels and several non-fiction books in 35 languages and most countries on earth. He has written and performed for the Royal Shakespeare Company in Stratford, England, and in 2001 resumed his practice as a visual artist, with exhibitions in spaces in North America, Europe, and Asia. 2006 marks the premiere of the feature film Everything's Gone Green, his first story written specifically for the screen and not adapted from any previous work. A TV series (13 one-hour episodes) based on his novel, "jPod" premiered on the CBC in January, 2008.

The New York Post An eye-catching prose style and a firm grip on the zeitgeist...Coupland's a brilliant wordsmith...

Playboy ...the witty humor, vulnerable uncertainty, and self-deprecating honesty of his narrator...makes Coupland's novel so exceptional.