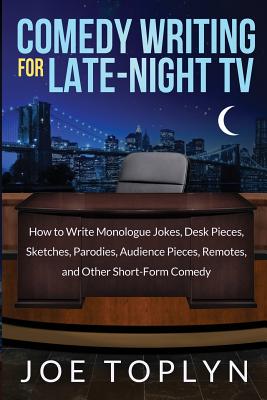 By Joe Toplyn
$24.95
Available at Warehouse

He has written and produced comedy/talk shows for over fifteen years. Now four-time Emmy winner Joe Toplyn reveals his proven methods of writing for late-night television in this one-of-a-kind insider's guide. Toplyn analyzes each type of comedy piece in the late-night TV playbook and takes you step-by-step through the process of writing it. His detailed tips, techniques, and rules include: - 6 characteristics every good monologue joke topic must have - 6 specific ways to generate punch lines - 12 tools for making your jokes their funniest - 7 types of desk pieces and how to create them - 9 steps to writing parodies and other sketches - How to go after a writing job in late night - PLUS a complete sample comedy/talk show submission packet Also use this comprehensive manual to write short-form comedy for the Internet, sketch shows, magazines, reality shows, radio, advertising, and any other medium.

Joe Toplyn began his television career on the writing staff of "Late Night with David Letterman." He went on to become co-head writer of "The Tonight Show with Jay Leno" and head writer of "Late Show with David Letterman." His other writing credits include the sketch show "In Living Color," several situation comedies, and the comedic detective show "Monk." In addition to his four Emmy wins, Toplyn is honored to have received over a dozen Emmy nominations.