THE FIGHT FOR INFLUENCE WHY THE UNITED STATES CANNOT WIN ANY WAR AGAINST RUSSIA or CHINA and CRITICAL USA ECONOMIC ISSUES: Russian Missiles, Chinese W (Paperback) 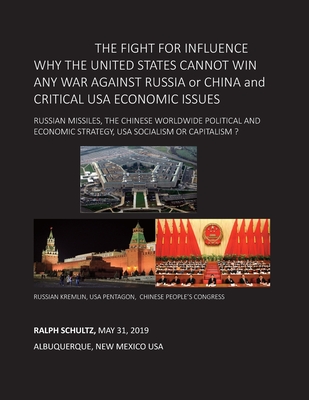 By Ralph Schultz
$23.05
Available at Warehouse

The book is a discussion, or really an interactive learning dialogue for average people, of the historical precedents and geo-political environment that explains Russian and Chinese political and military strategies. Both Russia and China are centuries old autocratic centrally planned empires that are reemerging to assert influence on their borders and throughout the world as part of a new multi-polar world. Both countries have been humiliated, dominated, and lost wars to outside powers since 1850. Their aggressive military and political posturing is substantially defensive and a natural response to the USA and European policies that have infringed upon their borders and sought to undermine their governments and push towards a European style liberal demcracy. This stress is creating the setting for for a violent brief regional conventional missile conflict that will inflict unacceptable damage to the US Navy despite these countries own losses. These viewpoints are ignored by western media and political leaders. The situation in Ukraine is reviewed. Hybrid warfare, cyber intrusions, and future space conflicts are evaluated.

A balanced viewpoint must be achieved to insure peaceful coexistance.

This book also explores USA economic issues that are slowing US economic growth such as persistent low wages and the embedded new structural unemployment. The increase in the concentration of wealth in America is evaluated that is reducing the size and income of the great middle class that grew after WWII from 1946-1975. USA worldwide strongoints are also presented such as the enormous US media and entertainment industry, the innovative and powerful high-tech sector, and the massive worldwide US military presence symbolized by the Pentagon.US socialism is evaluted. The book is 196 pages with many pictures and illustrations.