The Wealth of Nations (Mass Market) 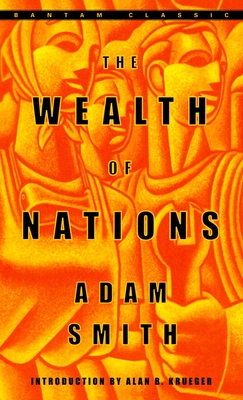 The Wealth of Nations
by Adam Smith

It is symbolic that Adam Smith’s masterpiece of economic analysis, The Wealth of Nations, was first published in 1776, the same year as the Declaration of Independence.

In his book, Smith fervently extolled the simple yet enlightened notion that individuals are fully capable of setting and regulating prices for their own goods and services. He argued passionately in favor of free trade, yet stood up for the little guy. The Wealth of Nations provided the first--and still the most eloquent--integrated description of the workings of a market economy.

The result of Smith’s efforts is a witty, highly readable work of genius filled with prescient theories that form the basis of a thriving capitalist system. This unabridged edition offers the modern reader a fresh look at a timeless and seminal work that revolutionized the way governments and individuals view the creation and dispersion of wealth--and that continues to influence our economy right up to the present day.

Adam Smith was born in a small village in Kirkcaldy, Scotland in 1723. He entered the University of Glasgow at age fourteen, and later attended Balliol College at Oxford. After lecturing for a period, he held several teaching positions at Glasgow University. His greatest achievement was writing The Wealth of Nations (1776), a five-book series that sought to expose the true causes of prosperity, and installed him as the father of contemporary economic thought. He died in Edinburgh on July 19, 1790.

"Adam Smith's enormous authority resides, in the end, in the same property that we discover in Marx: not in any ideology, but in an effort to see to the bottom of things."
--Robert L. Heilbroner