The Men Who Would Be King: An Almost Epic Tale of Moguls, Movies, and a Company Called DreamWorks (Paperback) 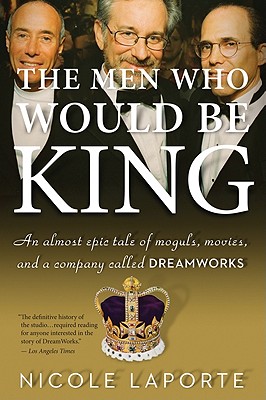 Former Variety reporter Nicole LaPorte draws from years of inside-the-filmmakers-studio access to spin a smart, gritty tell-all about a clash of industry titans in The Men Who Would Be King.

DreamWorks—the mega-million-dollar brainchild of Steven Spielberg, Jeffrey Katzenberg, and David Geffen—heralded a new age of entertainment empires when it launched in 1994, and their competitive strategy was fierce. For avid business readers, among others, seeing David Geffen in action as he seduces investors like Microsoft's Paul Allen and takes on CAA's Michael Ovitz is worth the price of admission. Their creative battles cost them untold billions on the way to the box office, but this is no rags-to-riches story: in fact, as they grow DreamWorks into one of the most influential film brands operating today, these rich men get richer, even as the stakes get higher.

NICOLE LAPORTE is a former reporter for Variety, where she covered the Hollywood movie industry for several years. She wrote "The Rules of Hollywood" column for the Los Angeles Times Magazine and has written for The New Yorker, the New York Times, the New York Observer, W Magazine, and theDaily Beast.

"LaPorte's lenghty narrative is the definitive history of the studio, an achievement of dispassionate reporting in the genre of corporate decline-and-fall...Hollywood, with its penchant for sunny publicity and an obsession for secrecy, is a notoriously difficult business in which to uncover the truth...Most reporters are not up to the task. LaPorte is... The Men Who Would Be King will be required reading for anyone interested in the story of DreamWorks."
--L.A. Times

"A thrilling ride... The bumbling and infighting are just too good, and sad, to resist... We're privy to some serious dirt. LaPorte has clearly done her homework... The sheer scope and depth of The Men Who Would Be King impresses. No hissy fit escapes LaPorte's gaze. Every time Geffen has a meltdown or A-list stars like Russell Crowe throw trantrums, LaPorte is there to capture it."
--Boston Globe

"Daily Beast contributor and former Variety reporter LaPorte penetrates the mysterious inner workings of DreamWorks. . . . LaPorte marshals an awesome body of research to vividly depict DreamWorks’ confused identity, the personality conflicts and ego clashes that raged behind the company’s friendly, low-key exterior . . . Behind-the-scenes glimpses at the productions of such signature DreamWorks films as American Beauty and Gladiator are wonderfully diverting Hollywood dirt, but the heart of the story is simple human ambition. Stories of Katzenberg’s toxic and litigious relationship with former boss and Disney honcho Michael Eisner, Geffen’s mission to destroy agent Michael Ovitz and the rivalry between DreamWorks Animation and Disney’s Pixar are fascinating for their insights into the ways petty personal issues are expressed in multibillion-dollar transactions. In Hollywood, it seems, business is always personal. A gripping account of money, ambition and the movies . . . same as it ever was."
—Kirkus

"Nicole LaPorte has found a big story—this is the great part—that is even bigger than first appears, the story of DreamWorks being the story of modern Hollywood, which is the dream life of the world. She has climbed into the engine room with pen and notebook and been careful to record the details and dirt, then turned all that into music, the result being a gutsy saga filled with larger than life characters and incident. Read this book only if you want to know what makes our country, as Leonard Cohen sang, the cradle of the best and the worst."
—Rich Cohen, author of Tough Jews: Fathers, Sons, and Gangster Dreams and Lake Effect


"Power, grandiosity, arrogance, and incomprehensible ego. It’s Hollywood, of course, and Nicole LaPorte’s exhaustive non-fiction narrative of DreamWorks and the bizarre triumvirate of Spielberg, Geffen, and Katzenberg is stunning. The book reads like a novel and the reporting is impeccable. If you pick up one book about Hollywood, make it this one."
—Buzz Bissinger, author of Friday Night Lights and former coproducer of NYPD Blue


"Here is the brilliant, brutal, misguided, narcissistic history of DreamWorks in all its glory, with David Geffen, Jeffrey Katzenberg, and Steven Spielberg working unscripted, without handlers or publicists dimming the lights to a rosy glow. Nicole LaPorte has written a lively, cunning studio history that should be required reading for all students of modern Hollywood."
—Mimi Swartz, author of Power Failure: The Inside Story of the Collapse of Enron


"This book has all the right elements: deep-dish research, attitude to burn, page-turning readability, and a great subject. It belongs up there with the classics of Hollywood reportage."
—Peter Biskind, author of Easy Riders, Raging Bulls: How the Sex-Drugs-and-Rock 'n' Roll Generation Saved Hollywood and Star: How Warren Beatty Seduced America

"Nicole LaPorte may never be able to eat lunch in Hollywood again, but her potential loss is our gain: The Men Who Would Be King is a riveting and honest portrayal of three of the most powerful men in the entertainment industry. I couldn't put it down and neither will you."
—William Cohan, author of House of Cards