Hollywood Made in China (Paperback) 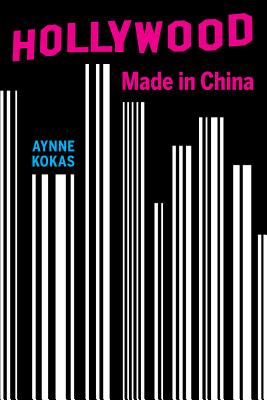 China’s entry into the World Trade Organization in 2001 ignited a race to capture new global media audiences. Hollywood moguls began courting Chinese investors to create entertainment on an international scale—from behemoth theme parks to blockbuster films. Hollywood Made in China examines these new collaborations, where the distinctions between Hollywood’s “dream factory” and Xi Jinping's "Chinese Dream" of global influence become increasingly blurred. With insightful policy analysis, ethnographic research, and interviews with CEOs, directors, and film workers in Beijing, Shanghai, and Los Angeles, Aynne Kokas offers an unflinching look at China’s new role in the global media industries. A window into the partnerships with Chinese corporations that now shape Hollywood, this book will captivate anyone who consumes commercial media in the twenty-first century.

Aynne Kokas is Assistant Professor of Media Studies at the University of Virginia and a nonresident scholar in Chinese media at the Baker Institute of Public Policy at Rice University.

"Hollywood Made in China is a timely contribution to film studies, media studies, and communication studies... impressive, far-reaching."
— China Review

"Hollywood Made in China is an elegant account of Hollywood’s evolving engagements in China’s commercial film environment... an accessible, intriguing study of an unlikely liaison."
— Modern Chinese Literature and Culture

"Like High Concept, scholar and industry consultant Justin Wyatt’s landmark 1994 book about Hollywood’s pivot towards packaged promotion - and merchandising-ready properties, Aynne Kokas’s Hollywood Made in China will be the seminal guidebook to understanding media in the era of the world’s pivot to China." - Karen Fang, University of Houston
— China Review International

"...an informative book with updated real-world cases and textual analysis on Sino-US film co-production. For those less familiar with the topic, this book serves as a great introduction and resource."
— Global Media and Communication

“Kokas’ work provides an insightful analysis of Sino-US co-ventures, and exemplifies an important approach to global media industries in general. . . .this is a groundbreaking book with an analysis that helps us understand how the Chinese government’s policy-making and Hollywood’s economic ambitions in the Chinese market complicate Sino-US media collaborations and construct ‘multilayered systems that unite the American and Chinese economies’.”
— Asian Journal of Communication