A Sea of Glass: Searching for the Blaschkas' Fragile Legacy in an Ocean at Risk (Organisms and Environments #13) (Hardcover) 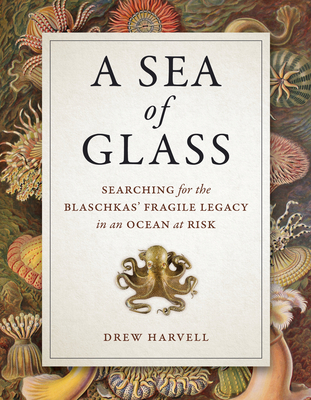 By Drew Harvell, Harry W. Greene (Foreword by)
Email or call for price
Out of Print

It started with a glass octopus. Dusty, broken, and all but forgotten, it caught Drew Harvell’s eye. Fashioned in intricate detail by the father-son glassmaking team of Leopold and Rudolf Blaschka, the octopus belonged to a menagerie of unusual marine creatures that had been packed away for decades in a storage unit. More than 150 years earlier, the Blaschkas had been captivated by marine invertebrates and spun their likenesses into glass, documenting the life of oceans untouched by climate change and human impacts. Inspired by the Blaschkas’ uncanny replicas, Harvell set out in search of their living counterparts. In A Sea of Glass, she recounts this journey of a lifetime, taking readers along as she dives beneath the ocean's surface to a rarely seen world, revealing the surprising and unusual biology of some of the most ancient animals on the tree of life. On the way, we glimpse a century of change in our ocean ecosystems and learn which of the living matches for the Blaschkas’ creations are, indeed, as fragile as glass.

Drew Harvell and the Blaschka menagerie are the subjects of the documentary Fragile Legacy, which won the Best Short Film award at the 2015 Blue Ocean Film Festival & Conservation Summit. Learn more about the film and check out the trailer here.

Drew Harvell is Professor of Ecology and Evolutionary Biology at Cornell University and Curator of the Blaschka Marine Invertebrate Collection. Her research on the sustainability of marine ecosystems has taken her from the reefs of Mexico, Indonesia, and Hawaii to the cold waters of the Pacific Northwest. She is a Fellow of the Ecological Society of America and the Atkinson Center for a Sustainable Future, a winner of the Society of American Naturalist Jasper Loftus-Hills Award, and a lead author of the oceans chapter in the recent U.S. Climate Change Assessment. She has published over 120 articles in journals such as Science, Nature, and Ecology and is coeditor of The Ecology and Evolution of Inducible Defenses.

"Harvell’s encounters with rarer creatures of the deep are as exciting for the reader as they were for her, but the takeaway from A Sea of Glass is an SOS call for a change in human behavior."
— Hakai Magazine

"Stunning photos . . . contextualize the dramatic taxonomic and ecological shifts in ocean life over the past 150 years."
— Nature

"Harvell seems to channel the devotion that motivated the Blaschkas."
— The Guardian

"A wonderful example of the intertwining of science and art where each expression of the wonders of the human mind sparks another."
— The Explorers Journal

"Curator and marine ecologist Harvell recounts her quest to find the living versions of the creatures and the scientific insights the 150-year-old glass replicas still provide." - The Best "Art Meets Science" Books of 2016

"Both the Blaschka collection and Harvell's work certainly stand the test of time as a testimony to the beauty and magnificence of the oceans' majesty and wonder."
— CHOICE

"You will want this book and then you will want to give it to one and all for a delightful and stimulating introduction to our wonderful ocean creatures."
— The Quarterly Review of Biology

"An engrossing story: the rediscovery of Cornell’s treasury of Blaschka models, the restoration of its damaged contents, her recognition of their potential as a ‘baseline’ for diversity and her years searching for their living counterparts in today’s oceans."
— Ocean Challenge