Mathematics in the Time of the Pharaohs (Paperback) 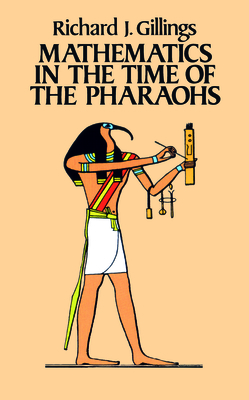 In the past, scholars have tended to dismiss the mathematics of the ancient Egyptians as child's play, compared with the achievements of the Greeks and other later civilizations. Nevertheless, in a society that achieved the marvelous accuracy of construction revealed in the Pyramids, extensive systems of irrigation canals, the erection of large granaries, levying and collecting of taxes, and other evidences of a well-organized and highly developed culture, mathematics must have played a major role.
In this remarkably erudite work, the first book-length study of ancient Egyptian mathematics, Professor Gillings examines the development of Egyptian mathematics from its origins in commercial and practical computations to such accomplishments as the solution of problems in direct and inverse proportion; the solution of linear equations of the first degree; determining the sum of arithmetical and geometrical progressions, and the use of rudimentary trigonometric functions in describing the slopes of pyramids. Drawing on all the extant sources -- Egyptian Mathematical Leather Roll, the Reisner Papyri, the Moscow Mathematical Papyrus, and, most extensively, the Rhind Mathematical Papyrus, a training manual for scribes- the author shows that although the mathematical operations of the ancient Egyptians were limited in number, they were adaptable to a great many applications. Professor Gillings is also at pains to debunk such myths as the numerical mysticism that arose in connection with the construction of the great Pyramids, and the oft-repeated assertion that the Egyptians were conversant with the Pythagorean Theorem.
Enhanced with photographs of age-old papyri and other artifacts, as well as the author's own calligraphic renderings of hieroglyphic and hieratic words and numerals, this carefully researched and well-presented study will fascinate Egyptologists, mathematicians, engineers, archaeologists, and any student or admirer of the remarkable civilization that flourished on the shores of the Nile so many centuries ago.