A Raisin in the Sun: The Unfilmed Original Screenplay (Paperback) 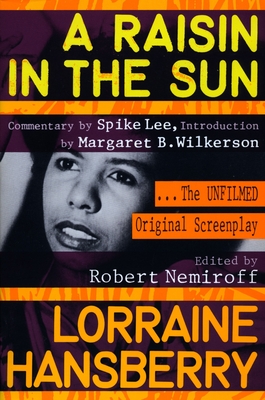 Under the editorship of the late Robert Nemiroff, with a provocative and thoughtful introduction by preeminent African-American scholar Margaret B. Wilkerson and a commentary by Spike Lee, this completely restored screenplay is the accurate and authoritative edition of Lorraine Hansberry's script and a testament to her unparalled accomplishment as a black woman artist.

The 1961 film version of A Raisin in the Sun, with a screenplay by the author, Lorraine Hansberry, won an award at the Cannes Film Festival even though one-third of the actual screenplay Hansberry had written had been cut out. The film did essentially bring Hansberry's extraordinary play to the screen, but it failed to fulfill her cinematic vision.

Now, with this landmark edition of Lorraine Hansberry's original script for the movie of A Raisin in the Sun that audiences never viewed, readers have at hand an epic, eloquent work capturing not only the life and dreams of a black family, but the Chicago—and the society—that surround and shape them.

Important changes in dialogue and exterior shots, a stunning shift of focus to her male protagonist, and a dramatic rewriting of the final scene show us an artist who understood and used the cinematic medium to transform a stage play into a different art form—a profound and powerful film.

Lorraine Hansberry (1930-1965) electrified the theatrical world with her first play, A Raisin in the Sun, which won the New York Critics Circle Award for the 1958-59 season. Before her tragic death from cancer at the age of 34, she had already produced a remarkable body of work, including The Sign in Sidney Brustein's Window and Les Blancs. Her former husband and literary executor, the late Robert Nemiroff, posthumously produced and published her To Be Young, Gifted and Black and the musical Raisin.

Robert Nemiroff (1929–1991) was a Broadway producer and the literary executor of Lorraine Hansberry's estate.

Praise for A Raisin in the Sun

“One of the handful of great American plays—it belongs in the inner circle, along with Death of a Salesman, Long Day's Journey Into Night, and The Glass Menagerie.”—The Washington Post

“A beautiful, lovable play. It is affectionately human, funny and touching....A work of theatrical magic in which the usual barrier between audience and stage disappears.”—John Chapman, New York News

“Miss Hansberry has etched her characters with understanding, and told her story with dramatic impact. She has a keen sense of humor, an ear for accurate speech and compassion for people.”—Robert Coleman, New York Mirror

“It is honest drama, catching up real people....It will make you proud of human beings.”—Frank Aston, New York World-Telegram & Sun