The Bassoon King: Art, Idiocy, and Other Sordid Tales from the Band Room (Paperback) 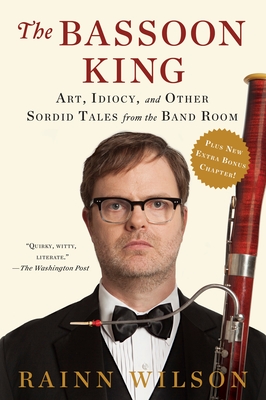 Rainn Wilson’s memoir about growing up geeky and finally finding his place in comedy, faith, and life

For nine seasons Rainn Wilson played Dwight Schrute, everyone's favorite work nemesis and beet farmer. Viewers of The Office fell in love with the character and grew to love the actor who played him even more. Rainn founded a website and media company, SoulPancake, that eventually became a bestselling book of the same name. He also started a hilarious Twitter feed (sample tweet: “I'm not on Facebook” is the new “I don't even own a TV”) that now has more than four million followers.

Now, he's ready to tell his own story and explain how he came up with his incredibly unique sense of humor and perspective on life. He explains how he grew up “bone-numbingly nerdy before there was even a modicum of cool attached to the word.” The Bassoon King chronicles his journey from nerd to drama geek (“the highest rung on the vast, pimply ladder of high school losers”), his years of mild debauchery and struggles as a young actor in New York, his many adventures and insights about The Office, and finally, Wilson's achievement of success and satisfaction, both in his career and spiritually, reconnecting with the artistic and creative values of the Bahá’í faith he grew up in.

RAINN WILSON is best known for his Emmy-nominated role as Dwight Schrute on NBC’s The Office, though today he’s equally well-known for his millions of Twitter followers and the philosophy website he founded, SoulPancake, which launched a New York Times bestselling book of the same name.

“Wilson defies the typical tropes of celebrity memoir. At points, The Bassoon King’s episodes read with the comparably startling, surreal and yet downright endearing outrageousness of an Augusten Burroughs or even David Sedaris essay. . . . Wilson’s memoir details what it’s like for a regular human, a relatable human, a nerd to become famous after climbing the proverbial ladder of professional acting (whilst keeping your humanity and your grounded perspective intact).”
—Paste Magazine, a top 10 book of November

"Filled with genuinely fascinating stories about his unusual upbringing, his entrée into the comedy world, and his thoughtfully developed views on life, Wilson’s book is an unsurprisingly funny and surprisingly poignant entry in the cavalcade of celebrity memoirs."
—BookPage

“A breath of fresh air in a genre desperately gasping for some. . . . A deeply personal recollection of Wilson's journey from bassoon player to Emmy-nominated beet farmer. . . . It's outlandish and unexpected, but it reads real.”
—Phoenix New Times

“You know Rainn Wilson as Dwight from NBC’s The Office, but I’m not sure many are fully prepared for how outrageous and often endearing his life story can be, captured in the pages of The Bassoon King.”
—The Oakland Press

"The Office star brings a value-added approach to his new book The Bassoon King: It's a coming-of-age story and a showbiz memoir and a funny read. Wilson also brings a values-added approach: The Bassoon King is a gentle introduction to the Bahá'i Faith, which Wilson re-embraced as an adult, after wrestling with both drugs and the question of meaning in his life."
—Milwaukee Journal Sentinel

“Wilson’s story is engaging. . . . Readers will relish his experiences as Dwight Schrute (who contributes the book’s foreword) in The Office—snagging the part, the show’s debut, the actors and writers, and behind-the-scenes reminiscences.”
—Publishers Weekly

“[Wilson] shares the ups and downs of his journey to fame in this funny and frank memoir . . . of particular interest to aspiring actors and other creative types, as well as the many fans of the long-running NBC comedy.”
—Booklist

"Certainly for fans of The Office, but the amiable actor also offers thoughtful glimpses into the realities of the TV and film industry and an impassioned rationale for living an openly spiritual life."
—Kirkus Reviews