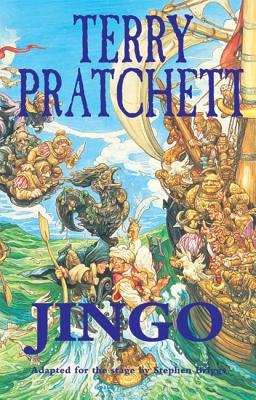 Somewhere in the Circle Sea between Ankh-Morpork and Al-Khali, the Lost Kingdom of Leshp has emerged after hundreds of years beneath the waves. And so with no ships, no army and no money, Ankh-Morpork goes to war against the Klatchian army claiming the rock as their own. Undaunted by the prospect of being tortured to death by vastly superior numbers of enemy troops, a small band of intrepid men and a very thick troll set out under the command of Sir Samuel Vimes of the City Watch. If they can survive long enough, maybe they can arrest an entire army for breach of the peace...

Terry Pratchett is one of the most popular authors writing today. He lives behind a keyboard in Wilt shire and says he 'doesn't want to get a life, because it feels as though he's trying to lead three already'. He was appointed OBE in 1998. He is the author of the phenomenally successful Discworld se ries and his trilogy for young readers, The Bromeliad, is scheduled to be adapted into a spectacular animated movie.