Blood at the Root: A Racial Cleansing in America (Hardcover) 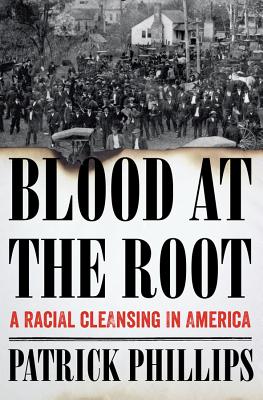 By Patrick Phillips
$26.95
Email or call for price.

A gripping tale of racial cleansing in Forsyth County, Georgia, and a harrowing testament to the deep roots of racial violence in America.

Forsyth County, Georgia, at the turn of the twentieth century was home to a large African American community that included ministers and teachers, farmers and field hands, tradesmen, servants, and children. Many black residents were poor sharecroppers, but others owned their own farms and the land on which they’d founded the county’s thriving black churches.

But then in September of 1912, three young black laborers were accused of raping and murdering a white girl. One man was dragged from a jail cell and lynched on the town square, two teenagers were hung after a one-day trial, and soon bands of white “night riders” launched a coordinated campaign of arson and terror, driving all 1,098 black citizens out of the county. In the wake of the expulsions, whites harvested the crops and took over the livestock of their former neighbors, and quietly laid claim to “abandoned” land. The charred ruins of homes and churches disappeared into the weeds, until the people and places of black Forsyth were forgotten.

National Book Award finalist Patrick Phillips tells Forsyth’s tragic story in vivid detail and traces its long history of racial violence all the way back to antebellum Georgia. Recalling his own childhood in the 1970s and ’80s, Phillips sheds light on the communal crimes of his hometown and the violent means by which locals kept Forsyth “all white” well into the 1990s.

Blood at the Root is a sweeping American tale that spans the Cherokee removals of the 1830s, the hope and promise of Reconstruction, and the crushing injustice of Forsyth’s racial cleansing. With bold storytelling and lyrical prose, Phillips breaks a century-long silence and uncovers a history of racial terrorism that continues to shape America in the twenty-first century.

Patrick Phillips is an award-winning poet, translator, and professor. A Guggenheim and NEA Fellow, his poetry collection, Elegy for a Broken Machine, was a finalist for the National Book Award. Phillips lives in Brooklyn and teaches at Stanford University.

[M]eticulously and elegantly reveals the power of white supremacy…to distort and destroy, not only lives and accomplishments, but historical memory, the law, and basic human civility.
— Carol Anderson - The New York Times

Deeply researched and crisply written, “Blood at the Root’’ is an impressive and timely case study of the racial violence and historical amnesia that characterize much of American history. Phillips…is a gifted storyteller.
— Matthew Delmont - The Boston Globe

There are places the civil rights movement literally passed by, and for decades Forsyth County was one of those pockets. Blood at the Root is a vital investigation of Forsyth’s history, and of the process by which racial injustice is perpetuated in America.

Nothing undermines social justice more than our collective ignorance about the racial terrorism that haunts too many places in America. Blood at the Root is a must-read, thorough, detailed, and powerful. It’s a story we need to know and never forget.

Some would say that Patrick Phillips should leave well enough alone and keep quiet… But [his] voice is too honest, too brave, and too brilliant to be silenced. With a poet’s gift for music, and with a detective’s dedication to the facts, Blood at the Root faces the specter of a bloody history without turning its back on the hope that the present has brought us. If the truth sets us free, this book will give you wings.

The burden of southern history lies not in what we know about the past but what we do not know. Patrick Phillips uncovers an important untold piece of history… What he reveals in this important book does not make this chilling piece of the past any easier to bear, but he brings it into sharper focus, which is long overdue.
— W. Ralph Eubanks, author of Ever is a Long Time: A Journey in Mississippi’s Dark Past

Phillips brings a journalist’s crisp perspective to this precise and disquieting account of a reprehensible and underreported chapter in America’s racial history.
— Booklist, Starred review