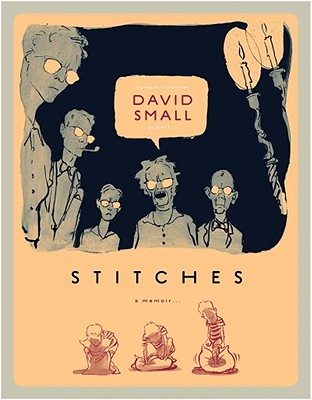 By David Small
Email or call for price
Out of Print

Finalist for the 2009 National Book Award and finalist for two 2010 Will Eisner Comic Industry Awards: the prize-winning children’s author depicts a childhood from hell in this searing yet redemptive graphic memoir.

One day David Small awoke from a supposedly harmless operation to discover that he had been transformed into a virtual mute. A vocal cord removed, his throat slashed and stitched together like a bloody boot, the fourteen-year-old boy had not been told that he had cancer and was expected to die.

In Stitches, Small, the award-winning children’s illustrator and author, re-creates this terrifying event in a life story that might have been imagined by Kafka. As the images painfully tumble out, one by one, we gain a ringside seat at a gothic family drama where David—a highly anxious yet supremely talented child—all too often became the unwitting object of his parents’ buried frustration and rage.

Believing that they were trying to do their best, David’s parents did just the reverse. Edward Small, a Detroit physician, who vented his own anger by hitting a punching bag, was convinced that he could cure his young son’s respiratory problems with heavy doses of radiation, possibly causing David’s cancer. Elizabeth, David’s mother, tyrannically stingy and excessively scolding, ran the Small household under a cone of silence where emotions, especially her own, were hidden.

Depicting this coming-of-age story with dazzling, kaleidoscopic images that turn nightmare into fairy tale, Small tells us of his journey from sickly child to cancer patient, to the troubled teen whose risky decision to run away from home at sixteen—with nothing more than the dream of becoming an artist—will resonate as the ultimate survival statement.

David Small author of the #1 New York Times best-selling Stitches, is the recipient of the Caldecott Medal, the Christopher Medal, and the E. B. White Award. He and his wife, the writer Sarah Stewart, live in Michigan.

Starred Review. Like other 'important' graphic works it seems destined to sit beside—think no less than Maus—this is a frequently disturbing, pitch-black funny, ultimately cathartic story whose full impact can only be delivered in the comics medium, which keeps it palatable as it reinforces its appalling aspects. If there’s any fight left in the argument that comics aren’t legitimate literature, this is just the thing to enlighten the naysayers.

With its mixture of stark realism and devilish fantasy, Stitches achieves a vibrant emotionalism that’s rare in both memoirs and graphic work of this kind. It’s never sentimental, but it may well move you to tears.
— Ken Tucker - Entertainment Weekly

One word. Phenomenal....If you haven’t read a graphic novel before, let this be your first. I cannot say enough about this book, which will be released in September and is something to look out for. Highly Recommended. I reluctantly give this novel 5 stars; reluctantly, only because there aren’t 6 stars to give out.
— Jeff Rivera - GalleyCat

Starred Review. It's Small's art that lifts his memoir into the extraordinary. His seemingly simple black-and-white wash captures people, emotions, relationships, and plot subtleties with grace, precision, and a flawless sense of graphic narration....compelling, disturbing, yet surprisingly easy to read and more than meets the high standard set by the widely praised Fun Home.

David Small’s Stitches is aptly named. With surgical precision, the author pierces into the past and, with great artistry, seals the wound inflicted on a small child by cruel and unloving parents. Stitches is as intensely dramatic as a woodcut novel of the silent movie era and as fluid as a contemporary Japanese manga. It breaks new ground for graphic novels.

Like the boy in this autobiographical novel my first reading of Stitches left me speechless. And in awe. David Small presents us with a profound and moving gift of graphic literature that has the look of a movie and reads like a poem. Spare in words, painful in pictures, Small, in a style of dry menace, draws us a boy's life that you wouldn't want to live but you can't put down. From its first line four pages in, 'Mama had her little cough', we know that we are in the hands of a master.

David Small evokes the mad scientific world of the 1950s beautifully, a time when everyone believed that science could fix everything....Capturing body language and facial expressions subtly, Stitches becomes in Small's skillful hands a powerful story, an emotionally charged autobiography.

Stitches is one of the most compelling books I’ve read in a long time. David Small, with his ground-breaking work, has elevated the art of the graphic novel and brought it to new creative heights.

— Stan Lee, co-creator of Spider-Man and other Marvel Comics

[B]rilliant and heartbreaking.... Small's drawing is masterful and evocative, from the wet-on-wet blurs of Detroit's hellish, smoky skyline, which launches the cinematic opening montage, to the carefully drawn tubes in his mother's nose as she lies dying in the hospital toward the end of the book.... Just think of Daniel Clowes's Ghost World or Megan Kelso's Squirrel Mother or Art Spiegelman's Maus. Now, to the list of powerful works of art in this versatile medium, we can add the horrific but ultimately redemptive Stitches.

A beautifully drawn, tragicomic graphic memoir about a childhood from hell.
— Newsweek