Spy: The Inside Story of How the FBI's Robert Hanssen Betrayed America (Paperback) 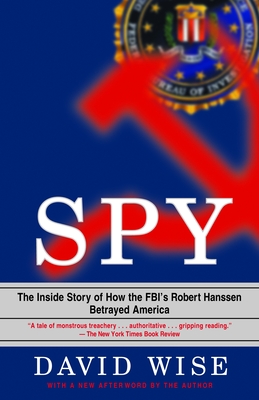 Spy tells, for the first time, the full, authoritative story of how FBI agent Robert Hanssen, code name grayday, spied for Russia for twenty-two years in what has been called the “worst intelligence disaster in U.S. history”–and how he was finally caught in an incredible gambit by U.S. intelligence.

David Wise, the nation’s leading espionage writer, has called on his unique knowledge and unrivaled intelligence sources to write the definitive, inside story of how Robert Hanssen betrayed his country, and why.

Spy at last reveals the mind and motives of a man who was a walking paradox: FBI counterspy, KGB mole, devout Catholic, obsessed pornographer who secretly televised himself and his wife having sex so that his best friend could watch, defender of family values, fantasy James Bond who took a stripper to Hong Kong and carried a machine gun in his car trunk.

• the previously untold story of how the FBI got the actual file on Robert Hanssen out of KGB headquarters in Moscow for $7 million in an unprecedented operation that ended in Hanssen’s arrest.

• how for three years, the FBI pursued a CIA officer, code name gray deceiver, in the mistaken belief that he was the mole they were seeking inside U.S. intelligence. The innocent officer was accused as a spy and suspended by the CIA for nearly two years.

• why Hanssen spied, based on exclusive interviews with Dr. David L. Charney, the psychiatrist who met with Hanssen in his jail cell more than thirty times. Hanssen, in an extraordinary arrangement, authorized Charney to talk to the author.

• the full story of Robert Hanssen’s bizarre sex life, including the hidden video camera he set up in his bedroom and how he plotted to drug his wife, Bonnie, so that his best friend could father her child.

• how Hanssen and the CIA’s Aldrich Ames betrayed three Russians secretly spying for the FBI–including tophat, a Soviet general–who were then executed by Moscow.

• that after Hanssen was already working for the KGB, he directed a study of moles in the FBI when–as he alone knew–he was the mole.

David Wise was America's leading writer on intelligence and espionage. He was the coauthor of The Invisible Government, a #1 bestseller about the CIA. He was also the author of Nightmover, Molehunt, The Spy Who Got Away, The American Police State, The Politics of Lying, Cassidy’s Run, Spy, and Tiger Trap, and the coauthor, with Thomas B. Ross, of The Espionage Establishment and The U-2 Affair. A native New Yorker and graduate of Columbia College, he was the former chief of the Washington bureau of the New York Herald-Tribune and contributed articles on government and politics to many national magazines. David Wise died in 2018.

“David Wise is a master at penetrating the invisible government. We won’t read a better book about this aspect of the Cold War.” –Seymour M. Hersh

“A brilliant, fascinating account of the CIA’s greatest trauma–whether it had been penetrated by agents of the KGB. It tied the Agency into knots for two decades, but the evidence outlined by David Wise now reveals that it was only a phantom. Paranoia is sometimes said to be the prerequisite for good counterintelligence–but the CIA’s history suggests that it can become its Achilles’ heel as well.” –William E. Colby

The Spy Who Got Away

“The most important book on intelligence since The Invisible Government . . . with the suspense and tension-building that you expect in John le Carré’s fiction.” –Ronald L. Ostrow, Los Angeles Times Book Review