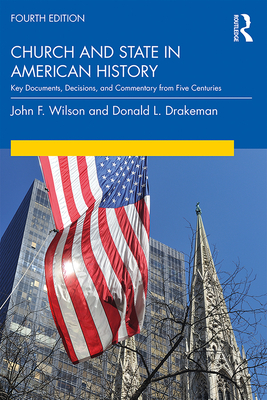 Church and State in American History illuminates the complex relationships among the political and religious authority structures of American society, and illustrates why church-state issues have remained controversial since our nation's founding. It has been in classroom use for over 50 years.

John Wilson and Donald Drakeman explore the notion of America as "One Nation Under God" by examining the ongoing debate over the relationship of church and state in the United States. Prayers and religious symbols in schools and other public spaces, school vouchers and tax support for faith-based social initiatives continue to be controversial, as are arguments among advocates of pro-choice and pro-life positions. The updated 4th edition includes selections from colonial charters, Supreme Court decisions, and federal legislation, along with contemporary commentary and incisive interpretations by modern scholars. Figures as divergent as John Winthrop, Anne Hutchinson, James Madison, John F. Kennedy, and Sandra Day O'Connor speak from these pages, as do Robert Bellah, Clarence Thomas, and Ruth Bader Ginsberg.

The continuing public and scholarly interest in this field, as well as a significant evolution in the Supreme Court's church-state jurisprudence, renders this timely re-edition as essential reading for students of law, American History, Religion, and Politics.

John F. Wilson is Collord Professor of Religion, Emeritus at Princeton University, where he directed the Project on Church and State. He is the author of Religion and the American Nation and Public Religion in American Culture, and served as general editor of Church and State in America: A Bibliographical Guide. Donald L. Drakeman is Distinguished Research Professor in the Program on Constitutional Studies at the University of Notre Dame, and a Fellow of the Centre for Health Leadership at the University of Cambridge. He is the author of Church, State and Original Intent and Church-State Constitutional Issues.