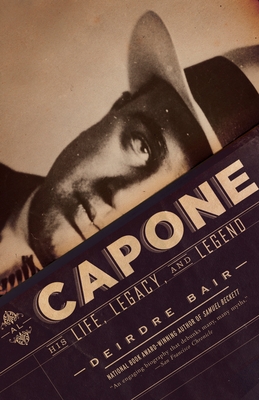 At the height of Prohibition, Al Capone loomed large as Public Enemy Number One: his multimillion-dollar Chicago Outfit dominated organized crime, and law enforcement was powerless to stop him. But then came the fall: a legal noose tightened by the FBI, a conviction on tax evasion, a stint in Alcatraz. After his release, he returned to his family in Miami a much diminished man, living quietly until the ravages of his neurosyphilis took their final toll.

Our shared fascination with Capone endures in countless novels and movies, but the man behind the legend has remained a mystery. Now, through rigorous research and exclusive access to Capone’s family, National Book Award–winning biographer Deirdre Bair cuts through the mythology, uncovering a complex character who was flawed and cruel but also capable of nobility. At once intimate and iconoclastic, Al Capone gives us the definitive account of a quintessentially American figure.

Deirdre Bair received the National Book Award for Samuel Beckett: A Biography. Her biographies of Simone de Beauvoir and Carl Jung were finalists for the Los Angeles Times Book Prize, and the Simone de Beauvoir biography was chosen by The New York Times as a Best Book of the Year. Her biography of Anaïs Nin and her most recent book, Saul Steinberg: A Biography, were both New York Times Notable Books.

“An engaging biography that debunks many, many myths.” —San Francisco Chronicle

“Offers a new history of Capone, and separates fact from fiction in the process. . . . Bair’s Capone is powerfully human.” —Smithsonian

“Bair discovers a rich trove of legends. . . . [She] is a wise and often iconoclastic guide through Capone mythology.” —The New York Times Book Review

“Al Capone provides tremendous insight into the man who, decades after his death, may be the best-known Chicagoan of all time.”  —St. Louis Post-Dispatch

“Dispel[s] many of the myths that have long swirled around Al ‘Scarface’ Capone.” —The New York Post

“[Bair] has succeeded in giving the real ‘Scarface’ the literary legacy his life and story richly deserve.” —Houston Press

“An intimate, psychologically astute, and richly embroidered biography of the most famous criminal in American history.” —Dick Lehr, coauthor of Black Mass: Whitey Bulger, the FBI, and a Devil’s Deal

“Beautifully researched and immensely readable . . . Reveal[s] a consistently surprising and exquisitely complex portrait of the man behind the legend.”

—Karen Abbott, author of Sin in the Second City: Madams, Ministers, Playboys, and the Battle for America’s Soul

“A complete and engrossing picture of Capone’s life and times.” —Nicholas Pileggi, author of Wiseguy: Life in a Mafia Family and screenwriter of Goodfellas and Casino

“Enticing . . . knocks it out of the park. In the hands of a master life-storyteller, Al Capone’s brief, explosive career seems as all-American as apple pie and sawed-off shotguns.” —Marion Meade, author of Bobbed Hair and Bathtub Gin: Writers Running Wild in the Twenties