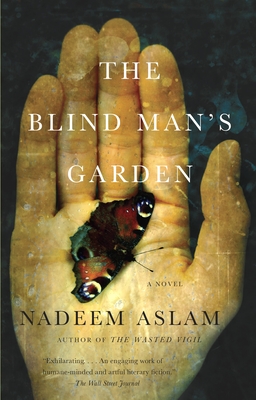 A Publishers Weekly and Kirkus Best Book of the Year

Growing up as brothers in a small town in Pakistan, Jeo and Mikal were inseparable; however as adults their paths have diverged sharply. Jeo is newly married and a dedicated medical student, while Mikal, in love with a woman he can’t have, has adopted the life of a vagabond. Nonetheless, when Jeo decides to slip across the border into Afghanistan to help civilians caught in the post-9/11 clash between American and Taliban forces, Mikal goes with him. But their good intentions cannot keep them out of harm’s way. A piercing portrayal of lives upended by war, The Blind Man’s Garden is an unflinching look at a world in which the line between enemy and ally is indistinct, and the desire to return home burns brightest of all.

“Aslam’s beautiful novel is at once a complicated family saga . . . and a fable about guilt, innocence, and the possibility of forgiveness and understanding.”
—The Boston Globe

“One [of] the most important novels of the past decade. . . . The Blind Man’s Garden is as much a family saga and a love story as a dialectic reflecting the dual responses to 9/11. . . . A masterpiece [of] extraordinary prose—lush, full of vivid images and juxtapositions.”
—Counterpunch

“A gripping and moving piece of storytelling that gets the calamitous first act in the ‘War on Terror’ on to the page with grace, intelligence and rare authenticity.”
—The Guardian (London)

“The Blind Man's Garden is most impressive in its stitching together of dramatic ironies, often under the star of sensuality and underlined by a stripe of brutality. . . . There is much to admire.”
—The Times Literary Supplement (London)

“Once or twice a year, a book stuns me. . . . [The Blind Man's Garden] has done just that. . . . Extraordinary. . . . Rich imagery, sage reflections, and immaculate prose are evident on every page. . . . A chilling picture of Pakistan's government and army colluding with terrorism.”
—Leyla Sanai, The Independent on Sunday (London)

“A gripping work that goes to the heart of Muslim fanaticism and Pentagon intransigence alike. Aslam is a wonderful talent, and we are lucky to have him.”
—The Telegraph (London)

“The extraordinary beauty of the writing makes the experience of reading [The Blind Man’s Garden] wholly exhilarating.”
—The Spectator (London)

“A brave, passionate narrative that is rich in symbolism and hard truths. . . . Aslam is a gifted writer, an honest witness with the eye of a poet. . . . There is no disputing the passion and urgency of [his] work. Its elegantly raw humanity appeals to the soul.”
—Irish Times

“Aslam never forgets his duty to make all of these [characters] entirely convincing—or to serve up page after page of compelling story-telling.”
—Daily Mail (London)

“A wonderful book—as propulsive as any thriller yet leavened with the subtlety of a writer who can inhabit the febrile mind of a jihadist just as intuitively as he can the weeping soul of a country drowning in religious extremism.”
—Metro (London)

“A life-affirming tale of love and redemption emerging from the stark landscape of loss. Love is not consolation, it is light. The book is Aslam’s prayer for the whole world, his attempt to bathe it in light.”
—Outlook India (New Delhi)