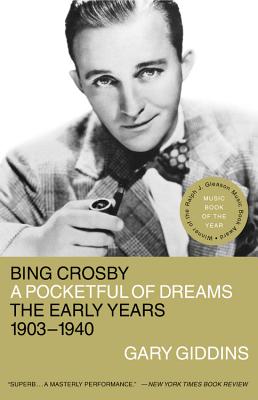 By Gary Giddins
Email or call for price
Subject to Availabilty

From Bing Crosby's early days in college minstrel shows and vaudeville, to his first hit recordings, from his 11 year triumph as star of America's most popular radio show, to his first success in Hollywood, Gary Giddins provides a detailed study of the rise of this American star.

Gary Giddins wrote the Weather Bird jazz column in the Village Voice for over 30 years and later directed the Leon Levy Center for Biography at the CUNY Graduate Center. He received the National Nook Critics Circle Award, the Ralph J. Gleason Music Book Award, and the Bell Atlantic Award for Visions of Jazz: The First Century in 1998.

His other books include Bing Crosby: A Pocketful of Dreams-The Early Years, 1930-1940, which won the Ralph J. Gleason Music Book Award and the ARSC Award for Excellence in Historical Sound Research; Weatherbird: Jazz at the Dawn of Its Second Century; Faces in the Crowd; Natural Selection; Warning Shadow; and biographies of Louis Armstrong and Charlie Parker. He has won six ASCAP-Deems Taylor Awards, a Guggenheim Fellowship, and a Peabody Award in Broadcasting. He lives in New York, NY.