The Third Rainbow Girl: The Long Life of a Double Murder in Appalachia (Paperback) 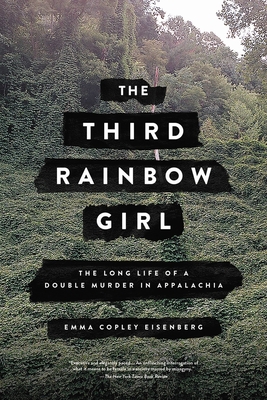 “In this thoughtful and immersive chronicle of the 1980 murders that thrust West Virginia’s Pocahontas County into the national spotlight, Eisenberg seeks to better understand not only the crimes and their aftermath, but also the lasting impact the region (which she came to know independent of her inquiry) had on her. A complex and captivating read, The Third Rainbow Girl weaves true crime with memoir to stunning effect.”
— Tove Holmberg, Powell's Books, Portland, OR

A stunning, complex narrative about the fractured legacy of a decades-old double murder in rural West Virginia—and the writer determined to put the pieces back together.

In the early evening of June 25, 1980 in Pocahontas County, West Virginia, two middle-class outsiders named Vicki Durian, 26, and Nancy Santomero, 19, were murdered in an isolated clearing. They were hitchhiking to a festival known as the Rainbow Gathering but never arrived. For thirteen years, no one was prosecuted for the “Rainbow Murders” though deep suspicion was cast on a succession of local residents in the community, depicted as poor, dangerous, and backward. In 1993, a local farmer was convicted, only to be released when a known serial killer and diagnosed schizophrenic named Joseph Paul Franklin claimed responsibility. As time passed, the truth seemed to slip away, and the investigation itself inflicted its own traumas—-turning neighbor against neighbor and confirming the fears of violence outsiders have done to this region for centuries.

In The Third Rainbow Girl, Emma Copley Eisenberg uses the Rainbow Murders case as a starting point for a thought-provoking tale of an Appalachian community bound by the false stories that have been told about.

Weaving in experiences from her own years spent living in Pocahontas County, she follows the threads of this crime through the complex history of Appalachia, revealing how this mysterious murder has loomed over all those affected for generations, shaping their fears, fates, and desires. Beautifully written and brutally honest, The Third Rainbow Girl presents a searing and wide-ranging portrait of America—divided by gender and class, and haunted by its own violence.

Emma Copley Eisenberg is a writer whose work has appeared in The Washington Post Magazine, Esquire, Granta, VQR, McSweeney’s, Tin House, The New Republic, Salon, Slate, and elsewhere. She lives in Philadelphia, where she directs Blue Stoop, a hub for the literary arts.

*Winner of the Pinckley Prize for True Crime*

"Headlines only deliver digestible tropes: Backcountry hicks confront hippie celebrants, two dead. But for the indefatigable Emma Eisenberg, approaching the murders at Briery Knob is about more than who fired the gun. An affection for this law-resistant corner of West Virginia enables her to transcend the simple formula of white male rage. Stepping into darkness, she extracts a nuanced sense of place and draws a map with historical connections."—Nancy Isenberg, New York Times bestselling author of White Trash: The 400-Year Untold History of Class in America

"Part crime narrative and part soul-searching memoir, Emma Copley Eisenberg's The Third Rainbow Girl has so much wisdom to offer. It's about the corrosiveness of preconceived notions, and about how trauma ripples through cultures and generations, and about finding connections in others and strength in oneself. Rich in detail and sensitivity and intelligence and honesty, this is a book you won't want to put down, one that will stay with you for a long time."—Robert Kolker, New York Times bestselling author of Lost Girls: An Unsolved American Mystery

"Emma Copley Eisenberg has written a true crime book that brings to mind Truman Capote's masterpiece In Cold Blood: elegantly written, perfectly paced, and vividly realized people and places. Equally impressive is her refusal to condescend to the inhabitants of the Appalachian community where the crimes occurred. The Third Rainbow Girl is a major achievement."—Ron Rash, New York Times bestselling author of Serena

"I blazed through this book, which is a true crime page-turner, a moving
coming-of-age memoir, an ode to Appalachia, and a scintillating
investigation into the human psyche's astounding and sometimes chilling
instinct for narrative. A beautiful debut that will stay with me for a
long time, whose story mesmerizes even as it convinces you to find all
mesmerizing stories suspect."—Melissa Febos, Lambda Literary Award winner and author of Whip Smart and Abandon Me

"Emma Eisenberg has distinguished herself as a reporter of remarkable wisdom and conscience, and her powers are on full display in The Third Rainbow Girl. Eisenberg's meticulous, compassionate reporting does not promise any of the easy answers we might expect from true crime: neither about what happened to the "Rainbow Girls," nor about poverty, injustice, and the fate of outsiders-whether hippies, hitchhikers, carpet baggers, or journalists-who give and take in this country's poorest areas. Her insights are hard won, deep, and devastating, making this an unforgettable debut."—Alice Bolin, author of Dead Girls: Essays on Surviving an American Obsession

"The Third Rainbow Girl succeeds on two levels: first, as a deep dive inquiry into the 1980 murders of two young women in Pocahontas County, West Virginia, and the ensuing, tangled investigation, and second, as an intimate and humane portrait of a close-knit Appalachian community, the kind of place that is often reduced by outsiders to little more than a cliché of itself. As Jimmy Breslin once wrote of the legendary New York chronicler, Damon Runyan, 'He did what all great reporters do ... he hung out.' A remarkable book."—Richard Price, NewYork Times bestselling author of Lush Life

"The Third Rainbow Girl is a staggering achievement of reportage, memoir, and sociological reckoning. We are better for this brilliant, gorgeous, and deeply humane book."—Carmen Maria Machado,National Book Award Finalist and author of HerBody and Other Parties

"In The Third Rainbow Girl: The Long Life of a Double Murder in Appalachia, Emma Copley Eisenberg uses the unsolved 1980 murders of Vicki Durian, 26, and Nancy Santomero, 19, in Pocahontas County, WV, as a lens through which to consider the effects of violent acts on the communities where they occur."—Library Journal

"The Third Rainbow Girl is a fascinating hybrid work of true crime and memoir... In following the twists and turns of the case, Eisenberg paints an affectionate portrait of Appalachia that complicates and contradicts stereotypes about the region."—Shelf Awareness

"The Third Rainbow Girl is a riveting excavation of the secrets time, history, and place keep. In a long-buried crime, Emma Copley Eisenberg has unearthed a story that reveals America."—Alex Marzano-Lesnevich, author of The Fact of a Body: A Murder & A Memoir

"[Eisenberg] reconstructs the case with a brisk pace
and a keen sensitivity ... offers a nuanced portrait of a crime and its decades
long effects. A promising young author reappraises a notorious double
murder-and her life."—Kirkus Reviews

"Eisenberg has
crafted a beautiful and complicated ode to West Virginia. Exquisitely written,
this is a powerful commentary on society's notions of gender, violence, and
rural America. Readers of literary nonfiction will devour this title in one
sitting."—Booklist, starred review

"This is essential reading for true crime fans."—Publishers Weekly

"Eisenberg follows the threads of this crime through the complex history of Appalachia, forming a searing and wide-ranging portrait of America--its divisions of gender and class, and of its violence."—Amazon Book Review

"Evocative and elegantly paced...The Third Rainbow Girl is not just a masterly examination of a brutal unsolved crime, which leads us through many surprising twists and turns and a final revelation about who the real killer might be...It's also an unflinching interrogation of what it means to be female in a society marred by misogyny, where women hitchhiking alone are harshly judged, even blamed for their own murders."—The New York Times Book Review

"The Third Rainbow Girl accomplishes what any good murder mystery should. It shines a spotlight on a nexus of people and a place. Eisenberg's tendency to weave in references to writers who've preceded her in the genre--Joan Didion and Truman Capote, for example--makes the reading experience uniquely thoughtful and introspective... The insights into human nature are the real gritty, good stuff you get from reading a masterful work of journalism like this one."—NPR, Fresh Air

"This book by Emma Eisenberg, whose reporting on the Sage Smith case was so essential for me, is a really beautiful study in subverted expectations: true crime, coming-of-age, West Virginia, the arcs of each story unexpectedly kinked."—Jia Tolentino

"Compelling and sensitive...The Third Rainbow Girl is not only a meticulously investigated story of a crime and its haunting aftermath, it's also a coming-of-age memoir."

"[A] deeply felt exploration of Appalachia, a land where fault lines of race, gender, and class run deep. Eisenberg, a one-time resident of Pocahontas County, never lets her former home off easy, but instead evokes a portrait at once generous and devastating."—Esquire

"If this is a book about a murder, it is also a book about the history
of economic exploitation in Appalachia, the systemic biases of the criminal
justice system, and the unreliability of memory."—The Nation

"In prose that brims with empathy, and through research that illuminates
narratives that have long been hidden by problematic representation, Eisenberg
exposes the kinds of fictions we tell ourselves often enough that we believe
them to be true."—Longreads

"A deeply felt exploration of Appalachia, a land where fault lines of race, gender, and class run deep."—Esquire

“Eisenberg lends her own voice to the audiobook, adding layers of emotional depth and perspective to an already fascinating story.”—BookRiot

"Eisenberg, who has her own history with Appalachia, pursued this story of two murders, looking at the lives of these women with insight and compassion, reckoning with her own coming of age, her own desire to push boundaries. It is a page turner that lingers long after its conclusion, a powerful meditation on women’s choices."—Pinckley Prize for True Crime