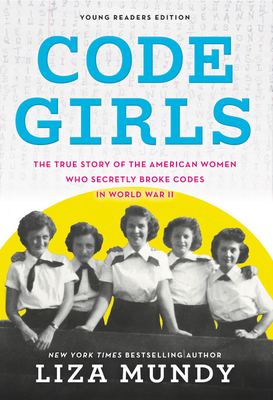 By Liza Mundy
$8.99
Available at Warehouse

In the tradition of Hidden Figures and The Girls of Atomic City, Code Girls is the amazing true story of the young American women who cracked German and Japanese military codes during World War II.

More than ten thousand women served as codebreakers during World War II, recruited by the U.S. Army and Navy. While their brothers and boyfriends took up arms, these women moved to the nation's capital to learn the top secret art of code breaking.

Through their work, the "code girls" helped save countless lives and were vital in ending the war. But due to the top secret nature of their accomplishments, these women have never been able to talk about their story--until now.

Through dazzling research and countless interviews with the surviving code girls, Liza Mundy brings their story to life with zeal, grace, and passion. Abridged and adapted for a middle grade audience, Code Girls brings this important story to young readers for the first time, showcasing this vital story of American courage, service, and scientific accomplishment.

New York Times bestselling author Liza Mundy is a former reporter at The Washington Post and contributes to numerous publications including The Atlantic, TIME, The New York Times, The New Republic, Slate, Mother Jones, Spectator (UK), and The Guardian. She is a frequent commentator on countless prominent national television, radio, and online news outlets.

Praise for Code Girls: Young Readers Edition:
* "The book reads like a movie script, with interesting characters and non-stop action bringing to life the history these women were making and living...excellent."—School Library Connection (starred review)

"Mundy highlights the lives of the many brilliant women who secretly served the code breaking mission against Nazi Germany and Imperial Japan.... A solid resource for younger researchers."—School Library Journal

"An entertaining presentation on a fascinating topic."
—Kirkus Reviews

Praise for Code Girls:
A New York Times bestseller!
"The book is a winner. Her descriptions of codes and ciphers, how they worked and how they were broken, are remarkably clear and accessible. A well-researched, compellingly written, crucial addition to the literature of American involvement in World War II."
—Kirkus Reviews (starred review)

"Similar to Nathalia Holt's The Rise of the Rocket Girls and Margot Lee Shetterly's Hidden Figures, this is indispensable and fascinating history. Highly recommended for all readers."—Library Journal (starred review)