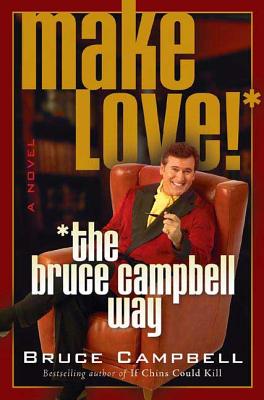 By Bruce Campbell
$22.99
Available at Warehouse

"This approach generates some of the most witty showbiz lunacy since This Is Spinal Tap."
---Sacramento News & Review

What you're reading right now is known as the "flap copy." This is where the 72,444 words of my latest book are cooked down to fit this space. But how does one do that? Do you reveal pivotal plot points like the one at the end of the book where the little girl on crutches points an accusing finger and shouts, "The killer is Mr. Potter"?
I have too much respect for you as an attention-deficient consumer to attempt such an obvious ruse. But let's not play games here. You picked up the book already, so you either:
A. Know who I am
B. Liked the cool smoking jacket I'm wearing on the cover
C. Have just discovered that the bookstore restroom is out of toilet paper
Is it a sequel to my autobiography If Chins Could Kill: Confessions of a B Movie Actor? Sadly, no, which made it much harder to write. According to my publisher, I haven't "done" enough since 2001 to warrant another memoir.
Is it an "autobiographical novel"? Yes. I'm the lead character in the story, and I'm a real person, and everything in the book actually happened, except for the stuff that didn't.
The action revolves around my preparations for a pivotal role in the A-list relationship film Let's Make Love! But my Homeric attempt to break through the glass ceiling of B-grade genre fare is hampered by a vengeful studio executive and a production that becomes infected by something called the "B movie virus," symptoms of which include excessive use of cheesy special effects, slapstick, and projectile vomiting.
From a violent fistfight with a Buddhist to a life-altering stint in federal prison, this novel has it all. And if the 72,444 words are too time-consuming, there are lots and lots of cool graphics.
Regards,
Bruce "Don't Call Me Ash" Campbell

"Ultimately, Make Love is a Bruce Campbell novel, starring Bruce Campbell, written for Bruce Campbell fans for whom Bruce Campbell can do no wrong. They'll no doubt find Campbell's latest endeavor nothing short of---to quote one of his most famous characters---groovy."
---The Onion

"One of the most delightfully deranged experiences you'll have reading this year. Hail to the king, baby."
---Rue Morgue

Bruce Campbell is the ultimate “B” actor with an ever-growing fan base.  In addition to starring in the huge cult hit Evil Dead series and a series of independent genre films, he has had featured roles in the film Bubba Ho-Tep, the Spider-man movies, the blockbuster Congo, the award-winning independent crime drama Running Time, and Paramount’s romantic comedy Serving Sara.

Bruce has also done a lot of television work, including appearances in Disney’s TV movies Gold Rush and their update of The Love Bug, and has also starred in the highly touted Fox series The Adventures of Brisco County Jr. Bruce then appeared as a recurring guest star on the hit shows Lois and Clark: The New Adventures of Superman, Hercules: The Legendary Journeys, Xena: Warrior Princess, Ellen, and Showtime’s edgy TV industry comedy Beggars and Choosers.