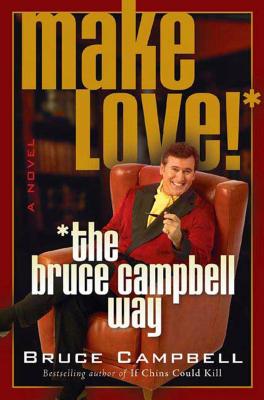 By Bruce Campbell
Email or call for price
Subject to Availabilty

What you're reading right now is known as the "flap copy." This is where the 72,444 words of my latest book, "Make Love the Bruce Campbell Way," are cooked down to fit in a 3 1/2-by-9 1/2-inch column. But how does one do that with a fictional story about a B movie actor's disastrous attempt to finally star in a big-budget Hollywood movie? Do you tantalize readers with snappy zingers like the one in chapter six where Biff the Wonder Boy says, "You may be bred in ol' Kentucky, but you're only a crumb up here"? Or do you reveal pivotal plot points like the one at the end of the book where the little girl on crutches points an accusing finger and shouts, "The killer is Mr. Potter "
I have too much respect for you as an attention-deficient consumer to attempt such an obvious ruse. But let's not play games here. You've already picked up the book, so you either:
A. Know who I am
B. Like the cool smoking jacket I'm wearing on the cover
C. Have just discovered that the bookstore restroom is out of toilet paper
Is this a relationship book? Well, if by "relationship book" you mean that the characters in it have relationships or are related to someone, then yes, absolutely. Will you learn how to pick up chicks? Good heavens, I can only hope so, though for best results in that department you should both read this book and be Brad Pitt.
Is it a sequel to my autobiography, "If Chins Could Kill: Confessions of a B Movie Actor"? Sadly, no, which made it much harder to write. According to my publisher, I haven't "done" enough since 2001 to warrant another memoir.
Is it an "autobiographical novel"? Yes. I'm the lead character in the story and I'm a real person and everything in the book actually happened, except for all the stuff that didn't.
Mostly, the action revolves around my preparations for a pivotal role in director Mike Nichols's A-list relationship film "Let's Make Love ," starring Richard Gere, Renee Zellweger, and Christopher Plummer. This is the kind of break most actors can only dream of. But my Homeric attempt to break through the glass ceiling of B-grade genre fare is hampered by a vengeful studio executive and a production that becomes infected by something called the "B movie virus," symptoms of which include excessive use of cheesy special effects, slapstick, and projectile vomiting.
When someone fingers "me" as the guy responsible for the virus, thus ruining my good standing in the entertainment industry (hey, I said it was fiction, okay?), I become a fugitive racing against the clock, an innocent patsy battling the shadowy forces of the studio system to clear my name, save my career, and destroy the Death Star. In a jaw-dropping twist worthy of Hitchcock (page 274), you'll gasp as I turn the tables on Hollywood and attempt to salvage my reputation in a town where you're only as good as your last remake.
From a violent fistfight with a Buddhist to a life-altering stint in federal prison, this novel has it all. If you like John Grisham, Tom Clancy, or one too many run-on sentences, you'll absolutely love "Make Love the Bruce Campbell Way." And if the 72,444 words are too time-consuming, there are lots and lots of cool graphics.
Regards,
Bruce "Don't Call Me Ash" Campbell
Bruce Campbell's first book, "If Chins Could Kill," was a major sleeper hit
and became a "New York Times" and national bestseller. His immense energy and
sharp wit are in evidence again in "Make Love the Bruce Campbell Way," a novel that will
have readers laughing out loud.

BRUCE CAMPBELL is the ultimate B actor with an ever-growing fan base. In addition to starring in the huge cult hit "Evil Dead" series and a series of independent genre films, he has had featured roles in the recent film "Bubba Ho-Tep, "the "Spiderman" movies, the blockbuster "Congo," the award-winning independent crime drama "Running Time," and Paramount s romantic comedy "Serving Sara. "Bruce has also done a lot of television work, including appearances in Disney s TV movies "Gold Rush" and their update of "The Love Bug, "and has also starred in the highly touted Fox series "The Adventures of Brisco County Jr." Bruce then appeared as a recurring guest star on the hit shows "Lois and Clark: The New Adventures of Superman, " "Hercules: The Legendary Journeys," "Xena: Warrior Princess," "Ellen," and Showtime s edgy TV industry comedy "Beggars and Choosers." In 2005, Bruce will be seen in "The Man with the Screaming Brain, "a film based on his own four-part comic book, that will also mark his directorial debut. He is also the author of the bestselling book "If Chins Could Kill."