First Into Nagasaki: The Censored Eyewitness Dispatches on Post-Atomic Japan and Its Prisoners of War (Hardcover) 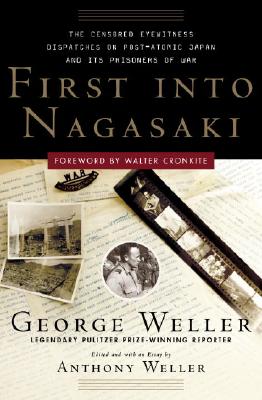 By Anthony Weller, George Weller
Email or call for price
Subject to Availabilty

George Weller was a Pulitzer Prize–winning reporter who covered World War II across Europe, Africa, and Asia. At the war’s end in September 1945, under General MacArthur’s media blackout, correspondents were forbidden to enter both Nagasaki and Hiroshima. But instead of obediently staying with the press corps in northern Japan, Weller broke away. The intrepid newspaperman reached Nagasaki just weeks after the atomic bomb hit the city. Boldly presenting himself as a U.S. colonel to the Japanese military, Weller set out to explore the devastation.

As Nagasaki’s first outside observer, long before any American medical aid arrived, Weller witnessed the bomb’s effects and wrote “the anatomy of radiated man.” He interviewed doctors trying to cure those dying mysteriously from “Disease X.” He typed far into every night, sending his forbidden dispatches back to MacArthur’s censors, assuming their importance would make them unstoppable. He was wrong: the U.S. government censored every word, and the dispatches vanished from history.

Weller also became the first to enter the nearby Allied POW camps. From hundreds of prisoners he gathered accounts of watching the atomic explosions bring an end to years of torture and merciless labor in Japanese mines. Their dramatic testimonies sum up one of the least-known chapters of the war—but those stories, too, were silenced.

It is a powerful experience, more than 60 years later, to walk with Weller through the smoldering ruins of Nagasaki, or hear the sagas of prisoners who have just learned that their torment is over, and watch one of the era’s most battle-experienced reporters trying to accurately and unsentimentally convey to the American people scenes unlike anything he—or anyone else—knew.

Weller died in 2002, believing it all lost forever. Months later, his son found a fragile copy in a crate of moldy papers. This historic body of work has never been published.

Along with reports from the brutal POW camps, a stirring saga of the worst of the Japanese “hellships” which carried U.S. prisoners into murder and even cannibalism, and a trove of Weller’s unseen photos, First into Nagasaki provides a moving, unparalleled look at the bomb that killed more than 70,000 people and ended WWII. Amid current disputes over the controlled embedding of journalists in war zones and a government’s right to keep secrets, it reminds us how such courageous rogue reporting is still essential to learning the truth.

“This is an important book—important and gripping. For the first time in print we can read the details of the nuclear bombardment of Nagasaki, Japan, as written by the first American reporter on the terrible scene. . . [George Weller’s] reports, so long delayed but now salvaged by his son, at last have saved our history from the military censorship that would have preferred to have time to sanitize the ghastly details . . . Also delayed by MacArthur’s censorship were Weller’s dispatches from his visits to American prison camps [w]here he uncovered the Japanese military’s savage treatment of their American prisoners . . . There is so much in this volume that we never knew or have long forgotten. This volume of the last generation’s history is an important reminder, a warning to inspire civilian vigilance.”
—Walter Cronkite, from the Foreword

“Unearthed at last after six decades, George Weller’s daring reportage from the ruins of Nagasaki has made an unforgettable and momentous book. From the remains of a scorched, fractured city to the unfathomable tragedy of Allied POWs in Japanese custody, he channeled his five senses straight to the page, giving eloquent testimony to the martyrs, American and Japanese alike, who were trapped in the Pacific war’s bloody fun-house.”
—James D. Hornfischer, author of Ship of Ghosts and The Last Stand of the Tin Can Sailors