Piece Of My Heart: A Portrait of Janis Joplin (Paperback) 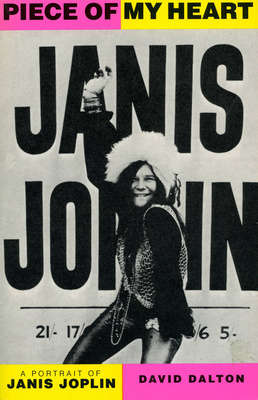 In 1972, Stonehill Books published David Dalton's Janis, a multimedia extravaganza that incorporated interviews, quotes, photographs, lyrics, Rolling Stone clippings, sheet music, a record of rapping and singing, and prose as wild and moving as Janis's performances. Piece of My Heart is a reconstruction and revision of that early work -- one of the first "rock 'n' roll" books -- leaving the prose and interviews intact, adding dozens of new photos, and incorporating a wealth of new material. Here is the best possible portrait of the lonely teenager from Port Arthur, Texas, who took the blues farther than anyone before or since, offering revealing glimpses of her on the road -- backstage with Jerry Lee Lewis, kidnapped in Kansas, partying with the Grateful Dead, the Band, Bonnie and Delaney, and with her own band, Big Brother and the Holding Company. But Piece of My Heart goes beyond Janis's own story to provide us with a portrait of the Kosmic Blues themselves -- the self destruction that lies at the heart of the rock 'n' roll myth.

David Dalton is a New York Times bestselling author, founding editor of Rolling Stone, recipient of the Columbia School of Journalism Award, and winner of the Ralph J. Gleason Best Rock Book of the Year award for Faithfull. He has written some twenty-odd books, including biographies of James Dean, Jim Morrison, Janis Joplin, Sid Vicious, the Rolling Stones, and, in 2009, a critically acclaimed biography of Andy Warhol, Pop. Dalton is the coauthor (with Jonathan Cott) of Get Back, the only book ever commissioned by the Beatles. He lives in upstate New York with his family and an assortment of llamas, horses, sheep, and a pig named Tiny (hint, he isn't).