Managing the Mountains: Land Use Planning, the New Deal, and the Creation of a Federal Landscape in Appalachia (Yale Agrarian Studies Series) (Paperback) 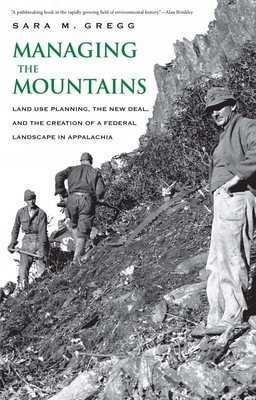 Historians have long viewed the massive reshaping of the American landscape during the New Deal era as unprecedented. This book uncovers the early twentieth-century history rich with precedents for the New Deal in forest, park, and agricultural policy. Sara M. Gregg explores the redevelopment of the Appalachian Mountains from the 1910s through the 1930s, finding in this region a changing paradigm of land use planning that laid the groundwork for the national New Deal. Through an intensive analysis of federal planning in Virginia and Vermont, Gregg contextualizes the expansion of the federal government through land use planning and highlights the deep intellectual roots of federal conservation policy.

Sara M. Gregg is assistant professor of history at the University of Kansas. She lives in Lawrence, KS.

“Sara Gregg has written a pathbreaking book in the rapidly growing field of environmental history. Focusing on the Appalachian forests and mountains in Virginia and Vermont, she illustrates how much transformative attention, both public and private, was focused on the health of the landscape and the people who lived in it.”—Alan Brinkley, author of The Publisher: Henry Luce and His American Century and of Voices of Protest: Huey Long, Father Coughlin, and the Great Depression

"....[T]his book is altogether a welcome addition to the expanding field of Japanese migration and transnational American Studies. The book invites readers to think more critically across the national borders and class boundaries that have tended to confine the field of our study until recently."—Yukari Takai, Histoire Sociale/Social History
— Karl Appuhn

“Gregg explores an under-examined region through serious and extensive scholarship. She is a solid writer who conveys her ideas and stories in extremely readable prose, without the use of jargon. Her writing flows well and is wonderfully easy to follow."—Neil Maher, author of Nature's New Deal: The Civilian Conservation Corps and the Roots of the American Environmental Movement
— Neil Maher

"The public wild lands of Appalachia contain curious human traces - stone walls, old foundations, cemeteries - that rest beneath an obscuring mantle of trees. In Managing the Mountains, her deft comparative analysis of the coming of federal conservation to Virginia and Vermont, Sara Gregg recovers for us the compelling stories behind these modest ruins - stories of local people, state politicians, and federal planners who managed and endured the transition from private farms to public forests. This is environmental history at its best."—Paul Sutter, author of Driven Wild

"Managing the Mountains is an ambitious book. . . . Readers with interests in Vermont land use and in comparative approaches to historical storytelling (whether involving Vermont or not) will find value and interest in that."—Blake Harrison, Vermont History
— Blake Harrison

"[A]dmirable . . . [helps] develop a deeper appreciation for the labor of environmental historians, historical geographers, and others who make history available to us, and for citizens and government officials at all levels who attempt to tackle issues of social justice and environmental stewardship in real places."—Cheryl Morse, Journal of Regional Science
— Cheryl Morse