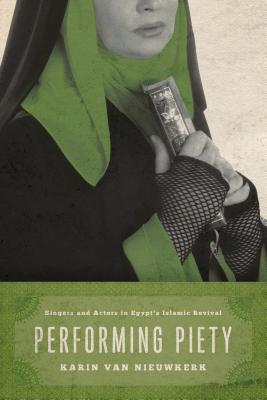 In the 1980s, Egypt witnessed a growing revival of religiosity among large sectors of the population, including artists. Many pious stars retired from art, “repented” from “sinful” activities, and dedicated themselves to worship, preaching, and charity. Their public conversions were influential in spreading piety to the Egyptian upper class during the 1990s, which in turn enabled the development of pious markets for leisure and art, thus facilitating the return of artists as veiled actresses or religiously committed performers.

Revisiting the story she began in “A Trade like Any Other” Female Singers and Dancers in Egypt, Karin van Nieuwkerk draws on extensive fieldwork among performers to offer a unique history of the religious revival in Egypt through the lens of the performing arts. She highlights the narratives of celebrities who retired in the 1980s and early 1990s, including their spiritual journeys and their influence on the “pietization” of their fans, among whom are the wealthy, relatively secular, strata of Egyptian society. Van Nieuwkerk then turns to the emergence of a polemic public sphere in which secularists and Islamists debated Islam, art, and gender in the 1990s. Finally, she analyzes the Islamist project of “art with a mission” and the development of Islamic aesthetics, questioning whether the outcome has been to Islamize popular art or rather to popularize Islam. The result is an intimate thirty-year history of two spheres that have tremendous importance for Egypt—art production and piety.