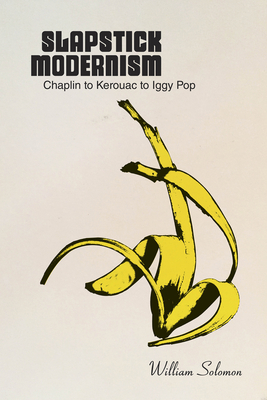 By William Solomon
Email or call for price
Subject to Availabilty

Slapstick comedy landed like a pie in the face of twentieth-century culture. Pratfalls and nyuk-nyuks percolated alongside literary modernism throughout the 1920s and 1930s before slapstick found explosive expression in postwar literature, experimental film, and popular music. William Solomon charts the origins and evolution of what he calls slapstick modernism --a merging of artistic experimentation with the socially disruptive lunacy made by the likes of Charlie Chaplin. Romping through texts, films, and theory, Solomon embarks on a harum-scarum intellectual odyssey from high modernism to the late modernism of the Beats and Burroughs before a head-on crash into the raw power of punk rock. Throughout, he shows the links between the experimental writers and silent screen performers of the early century, and explores the potent cultural undertaking that drew inspiration from anarchical comedy after World War Two.

William Solomon is an associate professor of English at the University of Buffalo.

"The book's central concept is unprecedented and, once explained, it seems quite extraordinary that no one has fleshed it out before. This is clearly a work of scope and insight whose ideas will have considerable applicability."--Juan Suãrez, author of Pop Modernism: Noise and the Reinvention of the Everyday

"Slapstick Modernism is a study of little remarked aesthetic influences, fascinating for articulating tendencies that should have been obvious (but were not)."--Shepherd Express

"Slapstick Modernism uses a fresh and innovative methodology to examine the ways comic films influenced the experimental principals of artists and thinkers from the high modernism of the early 1920s through to the Beat generation."--The Year's Work in American Humor Studies


"Admirably organized and beautifully written, it is stylistically uncontaminated by the frenetic lunacy it describes. It traces modernist literary experimentation and coterminous cinematic physical comedy, until the two parallel tracks merge in the final chapter to form a single phenomenon, "slapstick modernism."--TLS