On the Heights of Despair (Paperback) 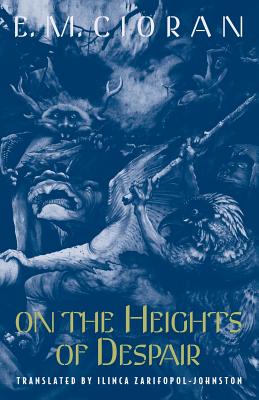 Born of a terrible insomnia—"a dizzying lucidity which would turn even paradise into hell"—this book presents the youthful Cioran, a self-described "Nietzsche still complete with his Zarathustra, his poses, his mystical clown's tricks, a whole circus of the heights."

On the Heights of Despair shows Cioran's first grappling with themes he would return to in his mature works: despair and decay, absurdity and alienation, futility and the irrationality of existence. It also presents Cioran as a connoisseur of apocalypse, a theoretician of despair, for whom writing and philosophy both share the "lyrical virtues" that alone lead to a metaphysical revelation.

"No modern writer twists the knife with Cioran's dexterity. . . . His writing . . . is informed with the bitterness of genuine compassion."—Bill Marx, Boston Phoenix

"The dark, existential despair of Romanian philosopher Cioran's short meditations is paradoxically bracing and life-affirming. . . . Puts him in the company of Nietzsche and Kierkegaard."—Publishers Weekly, starred review

"This is self-pity as epigram, the sort of dyspeptic pronouncement that gets most people kicked out of bed but that has kept Mr. Cioran going for the rest of his life."—Judith Shulevitz, New York Times Book Review

E. M. Cioran (1911-1995) was born and educated in Romania and lived in Paris from 1937 until his death. He is the author of numerous works, including On the Heights of Despair, also available from the University of Chicago Press.