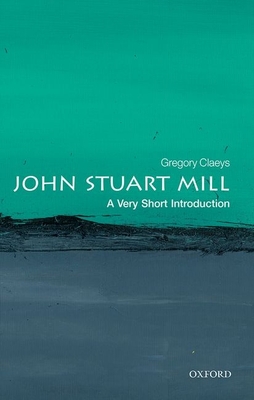 Very Short Introductions: Brilliant, Sharp, Inspiring John Stuart Mill (1806-73) is widely regarded as the leading liberal philosopher, economist, and political theorist of nineteenth century Britain. In his lifetime he was best known for his System of Logic (1843) and the Principles of Political Economy (1848). Today Mill is chiefly identified with On Liberty (1859), perhaps the definitive text of modern liberal statement of its subject, and probably the single most important work of modern political thought. Mill was also the first major male feminist thinker of the period (author of The Subjection of Women, 1869), and the first, as an MP, to introduce a bill for female enfranchisement before Parliament. This Very Short Introduction offers a brief survey of the life and key ideas of this most influential Victorian British writer. Moving chronologically, Gregory Claeys outlines the philosophical background out of which Mill developed, chiefly through the ideas of Jeremy Bentham and James Mill. He demonstrates how Mill's personal life, especially his 'mental crisis' of 1827, and his relationship with Harriet Taylor, were integral to his intellectual development. Throughout Claeys considers Mill's key works set within the context of his lesser writings and correspondence, and discusses the more controversial aspects of his thought concerning religion, secularism, and birth control. ABOUT THE SERIES: The Very Short Introductions series from Oxford University Press contains hundreds of titles in almost every subject area. These pocket-sized books are the perfect way to get ahead in a new subject quickly. Our expert authors combine facts, analysis, perspective, new ideas, and enthusiasm to make interesting and challenging topics highly readable.

Gregory Claeys, Emeritus Professor, University of London Gregory Claeys is Professor Emeritus of History at the University of London. He is the author of nine books, including Marx and Marxism (2018). He is editor of The Cambridge Companion to Utopian Literature (2010), and co-editor (with Gareth Stedman Jones) of The Cambridge History of Nineteenth Century Political Thought (2011).