Eduard Hanslick's on the Musically Beautiful: A New Translation (Hardcover) 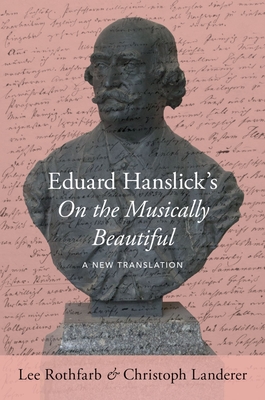 Eduard Hanslick's On the Musically Beautiful (Vom Musikalisch-Sch nen, 1854), written and published before the author turned 30, is a watershed document in the history of aesthetics, and of thought about music generally. The notion of "absolute music," which lies at the heart of the treatise, is now more than ever at the center of discussions about music, particularly that of the Classic and Romantic eras. Rothfarb and Landerer's translation includes three introductory essays offering fresh perspectives on Hanslick, and on the origins, publications, and translation history of his treatise, as well as its central concepts and philosophical underpinnings. The volume also includes thorough annotations, a readers' guide, a glossary of important terms and concepts, and an appendix, which comprises the original opening of Chapter 1, substantially rewritten in subsequent editions, as well as the original ending of the treatise that was excised by Hanslick in later editions. The book's ideas, cogently and often wittily expressed, are mandatory reading for anyone interested in eighteenth and nineteenth-century music and its cultural and intellectual background.

Lee Rothfarb is Professor of Music Theory at the University of California, Santa Barbara. He is the author of three books, including the 1989 winner of the Society for Music Theory's Outstanding Publication Award, Ernst Kurth as Theorist and Analyst (1988). The SMT has honored him with a LifetimeMembership in recognition of his founding its electronic journal, Music Theory Online, and serving as its first editor. Christoph Landerer is Project Staff and Principal Investigator at the Austrian Academy of Sciences, and author of Eduard Hanslick und Bernard Bolzano (2004). His main work areas are Hanslick, Herbart, and Nietzsche.