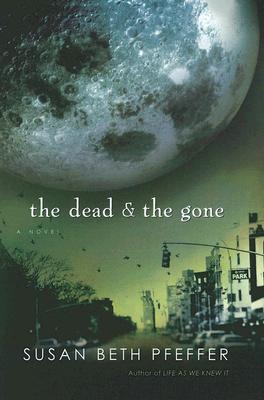 This is book number 2 in the Life As We Knew It Series series.

Susan Beth Pfeffer’s Life as We Knew It enthralled and devastated readers with its brutal but hopeful look at an apocalyptic event--an asteroid hitting the moon, setting off a tailspin of horrific climate changes. Now this harrowing companion novel examines the same events as they unfold in New York City, revealed through the eyes of seventeen-year-old Puerto Rican Alex Morales. When Alex's parents disappear in the aftermath of tidal waves, he must care for his two younger sisters, even as Manhattan becomes a deadly wasteland, and food and aid dwindle.
With haunting themes of family, faith, personal change, and courage, this powerful new novel explores how a young man takes on unimaginable responsibilities.

Susan Beth Pfeffer is the author of many books for teens, including the New York Times best-selling novel Life As We Knew It, which was nominated for several state awards, and its companion books, The Dead and the Gone, This World We Live In, and The Shade of the Moon. She lives in Middletown, New York.

* "As riveting as Life as We Knew It and even grittier. . . . The powerful images and wrenching tragedies will haunt readers."—Publishers Weekly, starred review

"As riveting as Life as We Knew It and even grittier, this companion novel returns to the premise of that previous book to show how New York City responds to the global disasters that ensue when an asteroid knocks the moon out of orbit. . . . Once again Pfeffer creates tension not only through her protagonist's day-to-day struggles but also through chilling moral dilemmas: whether to rob the dead, who to save during a food riot, how long to preserve the hope that his parents might return. . . . The powerful images and wrenching tragedies will haunt readers."