How to Ruin Everything: Essays (Paperback) 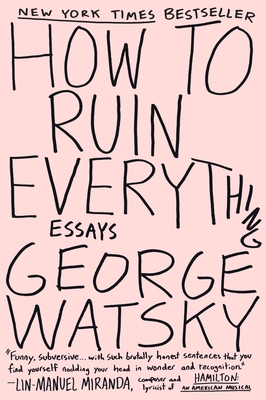 "Funny, subversive, and able to excavate such brutally honest sentences that you find yourself nodding your head in wonder and recognition."
—Lin-Manuel Miranda, composer and lyricist of In the Heights and Hamilton: An American Musical

Are you a sensible, universally competent individual? Are you tired of the crushing monotony of leaping gracefully from one lily pad of success to the next? Are you sick of doing everything right?

In this brutally honest and humorous debut, musician and artist George Watsky chronicles the small triumphs over humiliation that make life bearable and how he has come to accept defeat as necessary to personal progress. The essays in How to Ruin Everything range from the absurd (how he became an international ivory smuggler) to the comical (his middle-school rap battle dominance) to the revelatory (his experiences with epilepsy), yet all are delivered with the type of linguistic dexterity and self-awareness that has won Watsky devoted fans across the globe. Alternately ribald and emotionally resonant, How to Ruin Everything announces a versatile writer with a promising career ahead.

George Watsky is a writer and musician from San Francisco, California. After getting his start as a teenager in competitive poetry slam, winning both the Youth Speaks Slam and Brave New Voices National Poetry Slam at the Apollo Theater, he has since branched out into hip hop and long-form writing. Watsky has performed on HBO’s Russell Simmons Presents Def Poetry, the Ellen Show, the NAACP Image Awards, and his online videos have received hundreds of millions of YouTube hits. A committed live performer, he’s played hundreds of shows, both with his band and solo, across the North America, Europe, Australia, and India, including festival slots at San Francisco’s Outside Lands, Just for Laughs in Montreal, Rock the Bells, Soundset, Warped Tour, and released numerous music albums and mixtapes, including his most recent projects, a track on “The Hamilton Mixtape” in 2016, 2013’s “Cardboard Castles” and 2014’s “All You Can Do." He graduated from Emerson College with a degree in acting and dramatic writing, where he received the Rod Parker playwriting fellowship, and released a poetry collection, “Undisputed Backtalk Champion,” on First Word Press way back in 2006. And although he was forced to write a lot essays in school, he considers this his first attempt at prose.

"Whether you're a fan of Watsky's poetry or hip-hop or a total newcomer, you will find joy in the words contained herein. Watsky in prose form is just like Watsky on a track—funny, subversive, and able to excavate such brutally honest sentences that you find yourself nodding your head in wonder and recognition."
—Lin-Manuel Miranda, composer and lyricist of Hamilton: An American Musical and In the Heights

"George's essays will lift you and light you up."
—John Green, #1 New York Times bestselling author of The Fault in Our Stars

“Watsky is a skillful lyricist who has successfully transferred his wit, humor and humility into a smartly written collection of essays. How to Ruin Everything shows off his versatility as a writer and proves that the nerdy guys can also be part of the cool crowd.”
—Russell Simmons

“George Watsky is a lyrical mastermind. Unflinchingly honest, sincere, and gut-wrenchingly funny, How to Ruin Everything is one of the best books I've read this year. Watsky effortlessly translates his razor sharp wit from the stage to the page. This will be the first of many amazing books in the life of a tireless artist.”
—Hasan Minhaj, The Daily Show correspondent

"In How To Ruin Everything, George Watsky sets off around the world to find out why nothing ever explodes the way it should—not fireworks, spicy foods, hip-hop, sex with middle-aged women, or minor criminal activities. Along the way he captures how it feels to be young, in beautiful writing that is compulsively readable, gut-clutchingly funny, and deeply humane. Don't miss it."
—Jeff Chang, author Can't Stop Won't Stop, Who We Be, and We Gon' Be Alright

"At their best, these essays are incisive and soulful, suffused with scorching wit, careful observation, and probing self-awareness. And at their worst, they're still funnier than anything you're likely to hear at your city's most entertaining bar, even if you drink there every night for a month. Which you might have to, in order to process the fact that a guy who looks like he's twelve just wrote the best debut essay collection of the year."
—Adam Mansbach #1 New York Times bestselling author of Go the Fuck to Sleep

"He reminds me of myself, only a better writer than I can."
—Rhys Darby, Flight of the Conchords

“When George Watsky raps, the quantity and quality of his words and concepts often flow so quickly that you can only hope to let them wash over your consciousness and bathe in their essence, because it's impossible to stop time and live appreciatively in each individual moment. Thankfully though, in this collection of his writings, you can do just that, because that's how reading works. You can examine every drop of Watsky's kindness, thoughtfulness, self-awareness, curiosity, and adventurousness, seeing how he is continually and/or continuously growing as an artist and a human, and you will too."
—Myq Kaplan, comic featured on Conan, Last Comic Standing, and The Late Show with David Letterman

"How to Ruin Everything is laugh-out-loud funny, painfully honest, and subversively sincere. Watsky speaks boundlessly and insightfully about the life of a creative person. It is instantly relatable, clever, sharp and observant.”
—Jonny Sun, creator of the popular @jomnysun Twitter comedy account and MIT doctoral candidate

"George Watsky does again what he does best: attaches disarming, unparalleled wit to the mundane, making meditation of the routine and human. Everything you've come to expect from Watsky the rapper and George the poet is housed in this brilliant and unmatched collection of essays. His unique approach to rhythm is buoyed by his precision of idea and economy of language…An instant classic."
—Chinaka Hodge, author of Dated Emcees