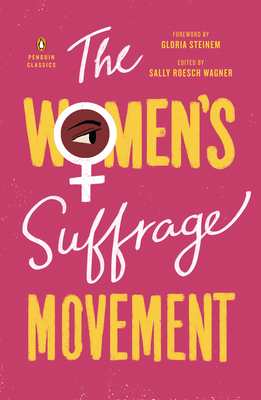 An intersectional anthology of works by the known and unknown women that shaped and established the suffrage movement, in time for the 2020 centennial of women's right to vote, with a foreword by Gloria Steinem

Comprised of historical texts spanning two centuries, The Women's Suffrage Movement is a comprehensive and singular volume with a distinctive focus on incorporating race, class, and gender, and illuminating minority voices. This one-of-a-kind intersectional anthology features the writings of the most well-known suffragists, such as Elizabeth Cady Stanton and Susan B. Anthony, alongside accounts of those often overlooked because of their race, from Native American women to African American suffragists like Ida B. Wells and the three Forten sisters. At a time of enormous political and social upheaval, there could be no more important book than one that recognizes a group of exemplary women--in their own words--as they paved the way for future generations. The editor and introducer, Sally Roesch Wagner, is a pre-eminent scholar of the diverse backbone of the women's suffrage movement, the founding director of the Matilda Joslyn Gage Foundation, and serves on the New York State Women's Suffrage Commission.

Sally Roesch Wagner is the founding director of the Matilda Joslyn Gage Foundation in Fayetteville, New York and currently serves as adjunct faculty in the honors program at Syracuse University. She is a member of the New York State Women's Suffrage Commission and a consultant to the National Women's History Project. Author of numerous women's history books and articles telling the "untold stories", her recent publications center on the Haudenosaunee influence on the women's rights movement. Wagner appeared in the Ken Burns PBS documentary, "Not for Ourselves Alone: The Story of Elizabeth Cady Stanton and Susan B. Anthony" for which she wrote the accompanying faculty guide for PBS, was a historian in the PBS special, "One Woman, One Vote" and has been interviewed on NPR's "All Things Considered" and "Democracy Now."

Gloria Steinem is a writer, lecturer, editor, and feminist activist. Her books include the bestsellers My Life on the Road, Revolution from Within, Outrageous Acts and Everyday Rebellions, Moving Beyond Words, Marilyn: Norma Jeane, and As if Women Matter. Steinem has received the National Magazine Award, the Lifetime Achievement in Journalism Award from the Society of Professional Journalists, the Society of Writers Award from the United Nations, and many others. In 2013, she received the Presidential Medal of Freedom from President Barack Obama.

“In her new book, The Women’s Suffrage Movement, the historian Sally Roesch Wagner aims to finally give a voice to the women history forgot.”
—The New York Times

“Abundantly useful for aspiring scholars, while those with a casual interest in the subject will be struck by its surprising complexity.”
—Kirkus

“In advance of the centennial of the 19th Amendment, Wagner shakes up the narrative about the women who made it possible [...] Her effort to correct the record is riveting; she empowers readers to remember and learn from the stories of their fierce foremothers.”
—Ms. magazine

“Comprehensive anthology — complete with a foreword from our generation’s most prominent feminist, Gloria Steinem.”
—InStyle magazine

“Editor of this [...] intersectional anthology, Sally Roesch Wagner, highlights some monumental moments and untold stories from history that paved the way for women to hit the polls.”
—Forbes

“An important new anthology ... The variety of perspectives and backgrounds represented in the volume is extraordinary ... Capturing the spirit and purpose of a pivotal period in American history, this stirring collection honors the forward-thinking women who fought hard to win the vote.”
—BookPage

“The most comprehensive intersectional anthology of writing about the women’s suffrage movement published to-date... Not only does The Women’s Suffrage Movement expose readers to the long-neglected intersectional history of women’s rights in America—celebrating the activism and writing of not just these Indigenous women, but women of a wide diversity of races and classes—it also serves as a reminder to readers that political gains once won can be lost, that rights and freedoms once enjoyed can be swiftly taken away if we stop paying attention.”
—Bustle