The Secret History of Magic: The True Story of the Deceptive Art (Hardcover) 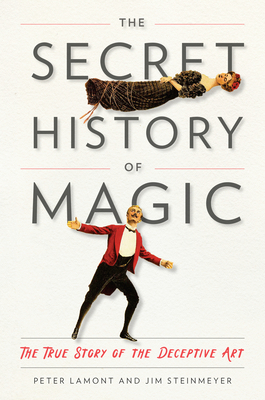 By Peter Lamont, Jim Steinmeyer
$28.00
On Our Shelves Now

If you read a standard history of magic, you learn that it begins in ancient Egypt, with the resurrection of a goose in front of the Pharaoh. You discover how magicians were tortured and killed during the age of witchcraft. You are told how conjuring tricks were used to quell rebellious colonial natives. The history of magic is full of such stories, which turn out not to be true. Behind the smoke and mirrors, however, lies the real story of magic.

It is a history of people from humble roots, who made and lost fortunes, and who deceived kings and queens. In order to survive, they concealed many secrets, yet they revealed some and they stole others. They engaged in deception, exposure, and betrayal, in a quest to make the impossible happen. They managed to survive in a world in which a series of technological wonders appeared, which previous generations would have considered magical. Even today, when we now take the most sophisticated technology for granted, we can still be astonished by tricks that were performed hundreds of years ago.

The Secret History of Magic reveals how this was done. It is about why magic matters in a world that no longer seems to have a place for it, but which desperately needs a sense of wonder.

Peter Lamont is a historian and psychologist at the University of Edinburgh, and a specialist in the history and psychology of magic. His articles have appeared in many scholarly journals and national newspapers, and his critically acclaimed books include The Rise of the Indian Rope Trick (one of the New York Times' "books of the year" of 2005).

Jim Steinmeyer is a world-renowned magic designer and author, who has created many of the mysteries featured by professional magicians, and special effects featured in popular Broadway shows. His books include The Last Greatest Magician in the World, the Taschen coffee-table book, Magic, and the Los Angeles Times bestseller, Hiding the Elephant.

Advance Praise for The Secret History of Magic

“I was the first in line for this book, I'm a big fan of the authors. The Secret History of Magic is an original look at a beloved art. It reveals how magicians did it, why magicians did it, and why we will always be amazed.”
-Neil Patrick Harris

“Jim Steinmeyer and Peter Lamont take the reader on a rollicking journey from the dawn of civilization to the present. This magnificent history of magic goes beyond all others in marrying the evolution of that ancient art to the evolution of science, technology, philosophy, and myth. It shows how magic has mirrored all of these, yet stayed a step ahead in its capacity to inspire wonder.”
-John McLaughlin, Former Deputy Director and Acting Director of the CIA

"Dr. Lamont is the perfect guide for this trip into the world of smoke and mirrors … A riveting yarn, full of quirky stories and wisdom about our need for mystery"
-Sunday Express

"Steinmeyer's combination of enthusiasm and erudition is a joy."
-Neil Gaiman

"Steinmeyer writes about events a century ago as vividly as if he had been there."
-Teller, Penn and Teller, The New York Times Book Review

"Steinmeyer is the ideal host, introducing us to a fascinating stranger, and sliding into the background...Here is a storyteller with a glint in his eye. Pull up a chair, you won't be disappointed."
-Mark Stafford, Times of London

"Peter Lamont has conjured up a magical read."
-The Observer

"Peter Lamont’s shrewd and often very funny book distils the perplexities of an age … this is a serious and thought-provoking book about how we witness and interpret the world."
-Hilary Mantel, Man Booker Prize winning author of Wolf Hall and Bring Up the Bodies

"There is no greater expert on the history of stage magicians than Jim Steinmeyer."
-Neil Patrick Harris

"Lamont disentangles the gargantuan knot of lies and sets the record straight with a joyful vengeance ...  that's just the way I like my historians."
-Teller