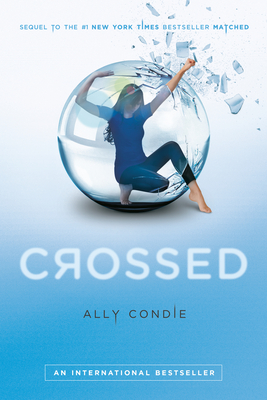 This is book number 2 in the Matched series.

“Readers will not be disappointed by this follow-up to the #1 Indie Next pick Matched, as Cassia follows her forbidden love Ky to the outer edges of the Society, hoping to prevent what seems to be his inevitable death. In alternating chapters from each character's point of view, we are drawn deeper into the mystery of the Society, about which Ky knows much more than he's ever let on. Being banished to the outer provinces is actually a return home for Ky, and his previous experiences may be the best chance he and Cassia have to survive the rough terrain. For that to happen, though, Cassia has to find him, and if she finds him, will her sacrifices be enough to keep them together?”
— Whitney Spotts, Schuler Books & Music, Lansing, MI

Perfect for fans of 1984, Brave New World, Black Mirror, and The Handmaid’s Tale.

Chasing down an uncertain future, Cassia makes her way to the Outer Provinces in pursuit of Ky--taken by Society to his certain death--only to find that he has escaped into the majestic, but treacherous, canyons.  On this wild frontier are glimmers of a different life . . . and the enthralling promise of rebellion. But even as Cassia sacrifices everything to reunite with Ky, ingenious surprises from Xander may change the game.  On the edge of Society, nothing is as expected, and crosses and double crosses make Cassia's path more twisted than ever.

Ally Condie is the author of the #1 New York Times bestselling Matched trilogy and co-author of the Darkdeep middle grade series. She is also the author of the novel Summerlost, an Edgar Award Finalist. A former English teacher, Ally lives with her family outside of Salt Lake City, Utah. Ally has an MFA from the Vermont College of Fine Arts, and is the founder and director of the nonprofit WriteOut Foundation.