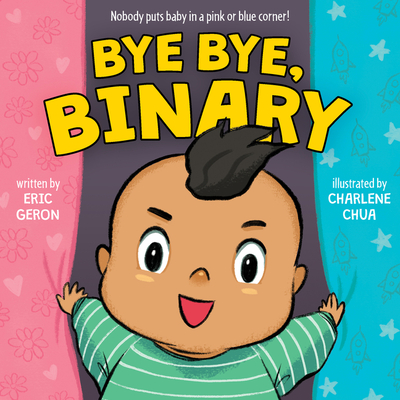 Fans of Feminist Baby by Loryn Brantz will love this board book about gender expression and being true to oneself.

Our little bundle of joy has arrived—to dismantle gender norms!

A joyful baby refuses to conform to the gender binary and instead chooses toys, colors, and clothes that make them happy. This tongue-in-cheek board book is a perfect tool to encourage children to love what they love and is also a great baby shower gift for all soon-to-be-parents.

Eric Geron (pronounced: jur-ON) is the author of Poultrygeist, illustrated by Pete Oswald, and the forthcoming young adult novel A Tale of Two Princes. Under his pseudonym Rico Green, he also wrote the New York Times-bestselling Disney Descendants novelization. He is delighted to present Bye Bye, Binary as his debut board book. Originally from Summit, New Jersey, Eric earned a creative writing degree from the University of Miami and spent many years as a children's book editor, acquiring numerous New York Times bestsellers before deciding to pursue his passion for writing full-time. He now lives in New York City, where he actively avoids gender reveal parties. Learn more about him at EricGeron.com and on Twitter, Instagram, and Facebook @EricGeron.

Charlene Chua (pronounced: CHOO-ah) has illustrated many things over the years for kids of all ages. Her illustration work has won several awards, while books she has illustrated have been nominated for OLA Forest of Reading, USBBY Outstanding International Books, OLA Best Bets, Shining Willow Award, and Kirkus Best Books. Charlene was born and grew up in Singapore and moved to Canada in 2007. They started work in 1998 as a web designer and went on to become a senior designer, web producer, and interactive project manager. However, what they really wanted to do was draw pictures all day. In 2003, they decided to give it a go, and, after a few years, they became a full-time illustrator. When they are is not making art, they enjoy cooking, reading, and playing with their cats. They now live with their husband (and cats!) in Hamilton, Ontario.

This board book would be a great baby shower gift, or one to counter some of the signaling in the world for slightly older readers, to empower youngsters to follow their hearts and not societal pressures. A purchase for libraries looking for more inclusivity and diversity. — School Library Journal