Yellen: The Trailblazing Economist Who Navigated an Era of Upheaval (Hardcover) 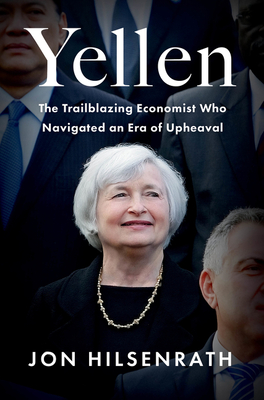 “A vivid portrait of an exceptional woman and a lively history of the economic and financial crises that helped make the treasury secretary and former Fed chair who she is today.” —Sylvia Nasar, #1 New York Times bestselling author of A Beautiful Mind

“Captivating. . . . Part biography, part history of ideas, the book provides a fascinating window into the ways thinking on economic policy has evolved in the last 25 years. . . . A must-read for anyone seeking to understand the current economic challenges we face.” —Liaquat Ahamed, Pulitzer Prize-winning author of Lords of Finance

An engrossing and deeply human chronicle of the past fifty years of American economic and social upheaval, viewed through the consequential life of the most powerful woman in American economic history, Janet Yellen, and her unconventional partnership in marriage and work with Nobel Laureate George Akerlof.

At the dawn of the 21st century, many of America’s leaders believed that free trade, modern finance, technology, and wise government policy had paved the way for a new era of prosperity. Then came a cascade of disasters—a bursting tech bubble, domestic terror attacks, a housing market implosion, a financial system crisis, a deadly global pandemic. These events led to serial recessions, deepened America’s political fractures and widened the divide between those best off and everyone else.

Long before the upheaval of the past two decades, Akerlof warned of flaws in modern economic thinking; then Yellen had to fix the economy on the fly as it cracked.

In telling their story, Hilsenrath explores long-running intellectual battles over the fragile balance between unruly democratic government and unpredictable markets. He introduces readers to the cast of modern intellectuals and policy makers who deciphered, shaped, and steered these systems through prosperity, chaos, and reformation. And he explains what went wrong, why, and what might happen next.

What emerges is an absorbing examination of how humans think and behave, and how those actions shape markets, inform economic policy, and could determine the future of a now-deeply divided nation.

Hilsenrath reminds us that economics is neither science nor ideology, as some once wished or promised.

Economics is an endeavor.

Most good love stories are, too.

Jon Hilsenrath is a senior writer for the Wall Street Journal, where he has been since 1997, reporting from Hong Kong, New York, and Washington, DC. He was a Pulitzer Prize finalist in 2014 for his coverage of the Federal Reserve; part of a team of 2009 Pulitzer finalists for coverage of the global financial crisis; and contributed on-the-scene reporting from the World Trade Center on September 11, 2001, which helped the WSJ win a Pulitzer in 2002. His 9/11 coverage also was featured in the book September Twelfth, by Dean Rotbart. Hilsenrath’s colleagues twice voted him among the nation’s most influential financial journalists. A nonpartisan, he has been a contributor to Fox News, Fox Business, CNBC, ABC, CBS, PBS, NPR, MSNBC, and C-SPAN. He graduated from Duke University and was a Knight-Bagehot Fellow at Columbia University.

“A vivid portrait of an exceptional woman and a lively history of the economic and financial crises that helped make the treasury secretary and former Fed chair who she is today.” — Sylvia Nasar, #1 New York Times bestselling author of A Beautiful Mind: The Life of Mathematical Genius and Nobel Laureate John Nash

“This book provides an in-depth portrait of the person Janet Yellen and teaches us how one can be effective while maintaining a moral compass in an often bitterly contentious and rapacious political landscape. It explores economic ideas and convictions, including hers and those of her husband George Akerlof and their son Robert Akerlof. Together they are an amazing family. They make this not just a biography, but an elucidation by example of the human side of our nation's economic experience." — Robert Shiller, Nobel Prize-winning economist and New York Times bestselling author of Irrational Exuberance

“A captivating examination of the unusual intellectual partnership between Janet Yellen, one of the most consequential economic policy makers of the past quarter century, and her husband, George Akerlof, a path-breaking Nobel prize-winning economic thinker. Part biography, part history of ideas, the book provides a fascinating window into the ways thinking on economic policy has evolved in the last 25 years, as it charts how Janet Yellen navigated the economy through uncharted waters as it was being buffeted by a series of unprecedented shocks and boom-bust cycles. A must-read for anyone seeking to understand the current economic challenges we face.” — Liaquat Ahamed, Pulitzer Prize-winning author of Lords of Finance: The Bankers Who Broke the World

“My friend George Akerlof is certainly one of the most innovative thinkers in economics today, just as Janet Yellen is unbeatable as a leader of economic policymaking. Their extraordinary contributions have been individual, but their combined vision has helped America understand itself. I am fortunate also to be close with their son, the economist Robert Akerlof, a sparkling intellectual in his own right. This is an extraordinary book, full of illuminating anecdotes and perceptive insights. A true delight to read.” — Amartya Sen, Nobel Prize-winning economist, philosopher, and author of Home in the World

“A fantastic biography … I loved the book--and I suspect that people who come to it with less background might get even more out of this insightful window into the interplay of policymaking and economic ideas … I strongly recommend.”  — Jason Furman, Aetna Professor of the Practice of Economic Policy, Harvard Kennedy School

“Hilsenrath’s new book on Yellen and Akerlof is a gem. It’s equal parts love story and economics book … Everyone should read it.”  — Austen Goolsbee, Professor of Economics, University of Chicago, Booth School of Business.

“This well-researched portrait of a talented woman unfolds into a slice of American economic history.” — Booklist (starred review)

"Yellen...is an elegant and erudite depiction of [Yellen and Akerlof's] intellectual voyages in pursuit of the idea that markets can fail and that sensible government action can improve people’s lives." — The Economist