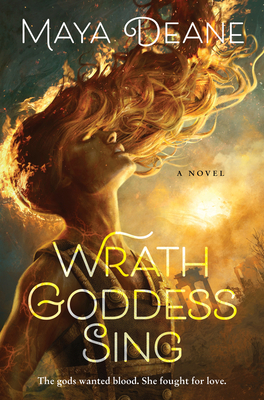 Drawing on ancient texts and modern archeology to reveal the trans woman’s story hidden underneath the well-known myths of The Iliad, Maya Deane’s Wrath Goddess Sing weaves a compelling, pitilessly beautiful vision of Achilles’ vanished world, perfect for fans of Song of Achilles, The Witch’s Heart, and the Inheritance trilogy.

The gods wanted blood. She fought for love.

Achilles has fled her home and her vicious Myrmidon clan to live as a woman with the kallai, the transgender priestesses of Great Mother Aphrodite. When Odysseus comes to recruit the “prince” Achilles for a war against the Hittites, she prepares to die rather than fight as a man. However, her divine mother, Athena, intervenes, transforming her body into the woman’s body she always longed for, and promises her everything: glory, power, fame, victory in war, and, most importantly, a child born of her own body. Reunited with her beloved cousin, Patroklos, and his brilliant wife, the sorceress Meryapi, Achilles sets out to war with a vengeance.

But the gods—a dysfunctional family of abusive immortals that have glutted on human sacrifices for centuries—have woven ancient schemes more blood-soaked and nightmarish than Achilles can imagine. At the center of it all is the cruel, immortal Helen, who sees Achilles as a worthy enemy after millennia of ennui and emptiness. In love with her newfound nemesis, Helen sets out to destroy everything and everyone Achilles cherishes, seeking a battle to the death.

An innovative spin on a familiar tale, this is the Trojan War unlike anything ever told, and an Achilles whose vulnerability is revealed by the people she chooses to fight…and chooses to trust.

Maya Deane (she/her) is a novelist, a visual artist, and an avid student of all the arts of civilization attributed to Inana by the first known writer, Enheduana. She would love to talk to you about the history of forks, the history of beer (and how the only woman who became king of Sumer was a bartender and brewer), cannabis-hotboxing Amazons in the archaeological record, the top three most famous eighteenth-century French trans women, how to cook ancient Canaanite food (hint: import bananas from India), and what it’s like making friends with a scholarly feline. (Shout-out to Apollo!) She is a graduate of the Rutgers-Camden MFA program in creative writing.

“This is a beautiful, bloody, glorious, revelation of a book… the mold-breaking trans epic I didn't even know I was craving.” — Charlie Jane Anders, bestselling author

"Deane’s tour de force debut gives The Iliad the beating heart of a legendary warrior....Deane’s narrative soars: epic in scope without ever growing tedious, with a huge supporting cast (including many wonderful LGBTQ characters) that readers will have no trouble keeping straight due to their beautifully shaded personalities. Add in massive battle scenes, meddling gods, and all the cultures of the ancient Mediterranean, and the result brings the familiar story to fresh, vivid, and unforgettable new life." — Publishers Weekly (starred review)

“Beautifully realized … a mythic reinvention for the ages.” — BookPage

“A magnificently wild ride from beginning to end. As fierce in friendship as it is in love and war, this is The Iliad taken into the stratosphere—no longer merely epic, but cosmic. I can’t stop thinking about it!” — Shelley Parker-Chan, bestselling author of She Who Became the Sun

"Groundbreaking, heart-wrenching, and devastatingly smart, Wrath Goddess Sing is a triumph. In Achilles, Maya Deane has truly given us a heroine for the ages." — Genevieve Gornichec, author of The Witch's Heart

"A bold, shining tapestry, weaving a bloody tale of war, birthright, and divinity with a tender story of longing, identity, and love. Epic and triumphant." — Ava Reid, author of The Wolf and the Woodsman

"The wine-dark sea takes on extra luminescence in this stunning re-creation of the Fall of Troy. Deane’s Achilles is unforgettable, as are her deep ties to friends and enemies alike. Written in the brilliant tradition of Mary Renault, Wrath Goddess Sing achieves its own epic standing. A tour de force not to be missed. Highly recommended." — Historical Novel Society

"It is, in many ways, a great book, and one that will...start discussions. The writing stands out and draws the reader in, creating a unique book and one I will think about for a long time to come." — Grimdark Magazine

"Deane has gone into the incredibly crowded field of current mythological retellings, and blown them all out of the water by doing something ambitious, powerful, meaningful and different...you can feel the love and the research that has gone into the authenticity, while at the same time the creativity and ambition that has gone into the divergences, all of which come together to form a beautiful, coherent whole." — Nerds of a Feather